After falling to ten year lows in August of last year, soybean oil embarked on a vigorous rally well before the other grain and oilseed members with values topping 35 cents per pound by the middle of April, a 38% price surge.

This also pushed soybean oil's percent contribution to the combined soybean crush value from an extremely low 27.7% to as high as 37.1%.

The seven month rally was fueled by a number of factors including ideas that the worst of the bad economic news out of China had passed implying increased demand for a number of commodities including vegetable oils.

There was also concern about the impact a fading El Nino weather event would have on tropical oils production in Southeast Asian producing countries such as Indonesia and Malaysia.

Over the past two months circumstances have changed as soybean meal has assumed leadership in the oilseeds complex embarking on one of the sharpest rallies in history registering gains in excess of $170 per short ton in less than two months and recovering almost all its ground vs. soybean oil.

A late season drop in South American production has boosted U.S. soybean and soybean meal export prospects for both this and next marketing year with additional support stemming from fears that El Nino's cousin, La Nina could result in adverse growing conditions in the Midwest during soybean's critical developmental phase in August and September.

Along these lines, this graphic shows the 10, 20 and 30 year seasonality of soybean oil's share of the soybean crush value basis central Illinois and compares that to the 2016 seasonality seen so far this calendar year.

As of mid-June, the percent of 27.0% is one of the lowest ever with the share rarely dipping below 30%.

Even at this low level the seasonality indicates that soyoil continues to lose its share of the combined soybean crush value well into the middle of July so that may be a more propitious time to look at buying soybean oil and selling soybean meal on ideas that this ratio will correct higher. 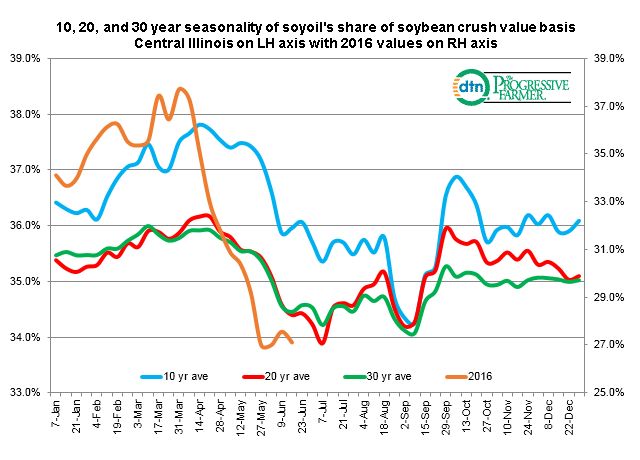