While the corn market is currently deriving support from Midwest weather forecasts that are trending warmer and drier for the rest of June, certainly positive is the surge in export business over the past few weeks with sales running at one of their strongest paces ever.

There is no doubt that the late season production declines in South America has improved our export outlook as evidenced by USDA's latest WASDE projections.

If this is the case we are not off to a rip-roaring start three months prior to the start of the new crop season.

This graphic shows new crop U.S. corn sales in million bushels as of the first week of June and those sales as a percent of the June WASDE U.S. corn export projection.

Foreign corn buyers like U.S. end-users are certainly aware that global supplies might not be as abundant as thought earlier in the spring but are notably resistant to procuring more supplies after an 80 cent rally has lifted values to their highest levels in a year and feed wheat becomes cheaper by the day. 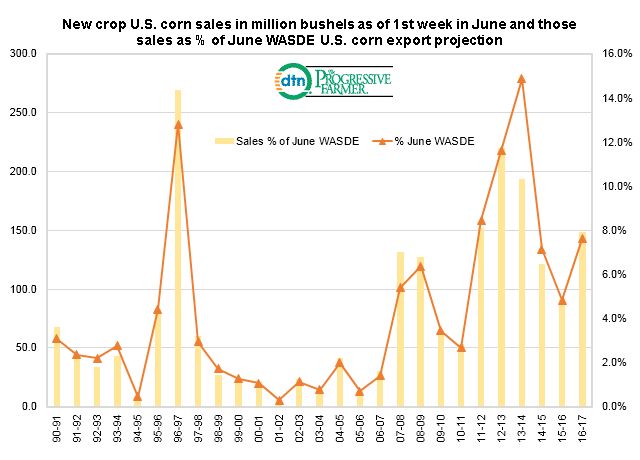