How long and how high will soybean meal prices go before the current rally will fizzles out?

Many in the trade are asking that with weather, China, end-use demand, fund appetite for volatility, availability of substitute ingredients just some of the factors that are relevant to that question needing to be answered.

The sharp escalation in values that seems to have come out of nowhere is one for the record books with prices are about as overbought as they have ever been.

As way of explanation, the RSI is a measure of the velocity of directional price movement.

It uses averages of up closes and down closes over a given period to calculate an index or how much strength is left in a trend.

We have gone back and looked at daily price action since April 4, 1991 and the only other net advance in the space of 60 days that may have topped the current rally occurred between May 31 and July 31 in 2012, the year of the horrific drought when a net price change of $150.20 occurred.

The current rolling two month average of the nine day RSI at 73.72 has however never been exceeded over the past 25 years so it is fair to say this is the most overbought the soybean meal market has ever been. 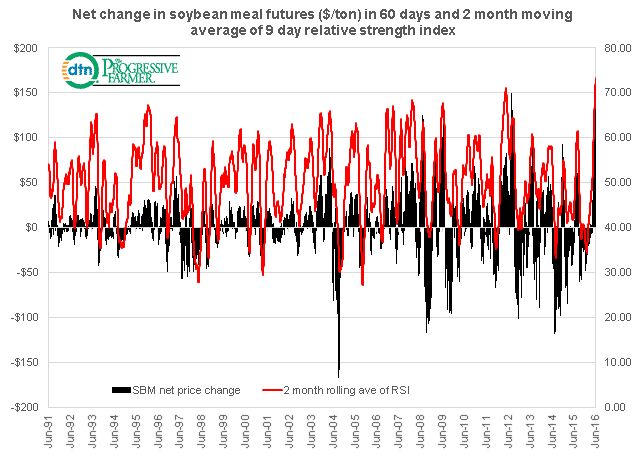