With the U.S. likely to export its smallest amount of wheat since the 1976/77 marketing year, the USDA's initial U.S. wheat export projection for the 2016/17 season is a mere 875.0 million bushels.

Other than a similar initial projection given for the 2002/03 season in the May 2002 WASDE report this may be the lowest initial wheat export projection ever.

The question is whether the USDA may be overly pessimistic and is there any reason to think that final overseas shipments will be higher.

To answer this question we looked at the prior initial USDA export projections that are given in the May WASDE report which is the last one before the new marketing year starts which for wheat is June 1st to the following May 31st.

We compared that figure to the actual final export number for each marketing year and also reported cumulative new crop sales as of the second week of May prior to the marketing year starting as a percent of the new crop wheat export projection.

The most recent export sales report shows cumulative sales as of the second week of May for the 2016/17 season at 128.7 million bushels and that is 14.7% of the 875 million export projection.

That is actually the fourth highest percent going back to the 1990-91 season.

In the 1996/97 year exports as of the second week of May were 18.0% of the WASDE projection though final exports were only 27 million bushels higher than the initial forecast of 975 million bushels.

With a decent amount of new crop sales already on the books there may be some room for upward revisions though competitor supplies are more than ample. 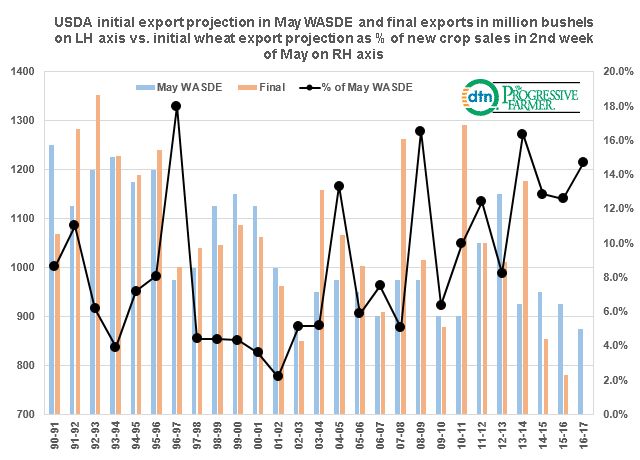