The corn market has dropped about 50 cents over the past two weeks as plantings for the most part have gone quite well.

There is some concern that continued wet and cold weather in the Upper Midwest may result in some intended corn ground being seeded to other crops or enrolled in the prevented planting insurance program.

One state prominently mentioned has been North Dakota where in recent years a large amount of corn and even soybeans have not been able to get in the ground due to delayed seedings.

Some may say "North Dakota? Really?". The fact is that North Dakota has over the past 20 years become a major player in U.S. corn and soybean production.

Where have all these new corn and soybean acres come from?

High prices have resulted in some new ground being seeded, but a large amount of corn and soybean area has come from land that used to be sown with spring wheat as North Dakota has traditionally has been and still is the largest spring wheat producing state.

The accompanying graphic shows that in 1994, corn accounted for a mere 7.3% of combined corn, soybean, and spring wheat acres and soybeans were an even smaller 6.1% of that total.

Why this has happened we imagine has do with economics, specifically the net returns per acre of corn and soybeans must now exceed those of spring wheat.

Interestingly, corn and soybean prices have only increased slightly relative to spring wheat values as indicated by the just slight upward movement in the price ratio trends as denoted in the graphic.

The rising trend of higher corn and soybean acreage at the expense of spring wheat area is much higher.

The price ratios may not explain the whole situation and having net return per acre data would be better.

There has also been talk that North Dakota's growing season is getting warmer and longer and farmers there may now be able to use longer season seed hybrids as opposed to the shorter season varieties that often yielded quite a bit less. 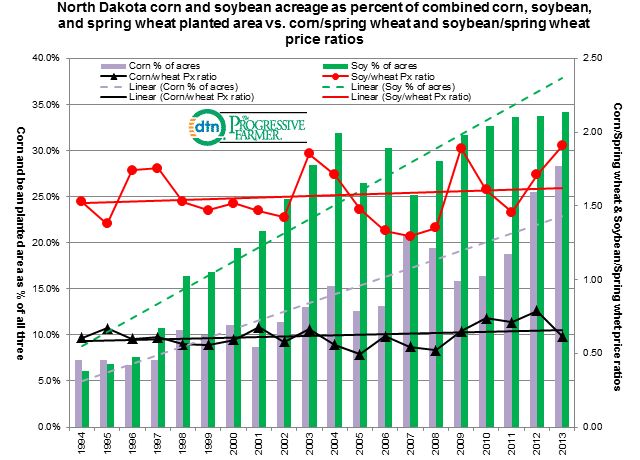