The trade is anticipating a large increase in U.S. soybean acreage next year continuing the trend seen in recent seasons.

There has been speculation that total planted area may approach 80.0 million acres, a record amount despite a corn-soybean ratio and net return per acre budgets that show corn the more profitable crop to plant.

We suspect that shift away from continuous corn especially in the Eastern Corn Belt, ideas that soybean prices have a greater chance of remaining close to current lofty levels given a robust rate of demand, and a belief that soybean yields will fare relatively better if yet another season of adverse weather is experienced will encourage greater soybean acreage.

The question then is where these extra plantings will occur.

Soybeans are planted in a wider geographic area than corn especially in the Delta and Southeast where i t competes with cotton and peanuts for acreage.

There has also been an expansion into states more north and west, similar to what has been seen with corn in recent years.

The accompanying chart shows the 5.10, and 20 year compounded annual growth rate for planted soybean area in each of the top 18 producing states along with the percent of U.S. acreage that each state accounted for in 2002 and 2012.

IL and IA continue to plant the most soybeans at 11.7% and 12.1% of U.S. acreage last year respectively.

Other traditional soybean producing states that have seen their percent of U.S. acreage decline include IN, MI, MN, and OH.

In fact, most have seen their five and ten year annual growth rates for planted area actually decline.

Conversely, many states north and west particularly in the Plains region have seen their soybean acreage expand tremendously.

This is so in KS, SD, and especially ND whose share of total U.S. soybean acreage has gone from 3.6% to 6.2% over the last ten years.

We also have seen soybean acreage increase in the southern states of LA, MS, and TN in recent years.

Previous Post (Trends for U.S. Corn Acreage in Top States)
Next Post (What Should 2013 Trend Yield for U.S. Corn be Estimated At?) 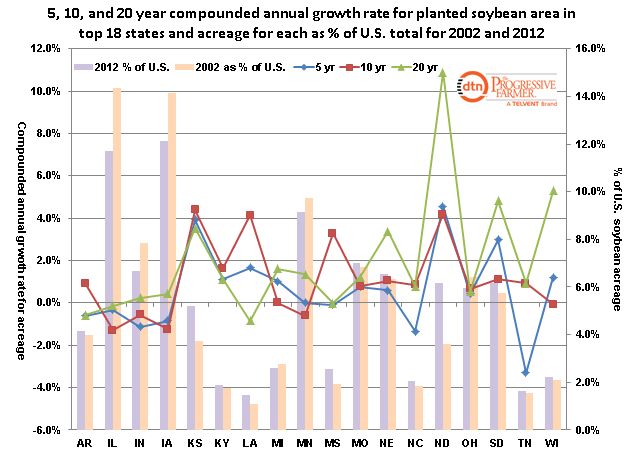