It's always a pleasure to brag about the good works of the DTN/The Progressive Farmer staff. I couldn't be happier to brag about one of our veteran stars, Crops Technology Editor Pamela Smith.

This week she received the Excellence in Journalism Award from the Weed Science Society of America, given at the organization's annual meeting in New Orleans.

It's always an honor when you're singled out for recognition. For a journalist, it's especially cool when that award comes from a group that you cover, sometimes positively, sometimes not, on a regular basis.

In this case, though, the announcement is only half the story. Smith didn't just receive an annual award as a function of her name finally rising to the top.

Until this week the WSSA had not handed out awards to journalists. The Excellence in Journalism Award was created in 2018, at a time when there is a lot of journalistic focus on weeds, the things we use to control them, and the environmental and human health issues that surround this area of science. So it's pretty clear that all those stories, and Pam's in particular, were on the minds of a group of WSSA members who petitioned to create such an award.

There certainly will be other accomplished journalists who will earn this recognition in future years. To be the first one, whose work helped encourage WSSA members to establish the award, is a great honor indeed.

"Pam is very highly respected by weed scientists in both academia and industry and always strives to present the facts as best as possible," said Lee Van Wycheh, Director of Science Policy for the WSSA, who presented the award. "She was independently nominated by several weed scientists, which shows how respected she is within the weed science and research community."

It is the most recent in a long list of awards, and firsts, for this Illinois farm girl who has been a pioneer in a once male-dominated industry. In high school, she was among the first females to demand entrance into the Future Farmers of America.

She was the first agriculture writer, regardless of gender, to win the prestigious Jesse H. Neal National Business Journalism award, for a series on soybean rust. These "Neals" are considered the Pulitzer Prize of business journalism, a genre that includes works covering medicine, law, technology, education and many other industries.

She received a second Neal award as part of a team covering the legacy of passing down the farm through the generations. She has been named journalist of the year by the American Phytopathological Society (the plant pathologist professional group) and is a two-time winner of the American Agriculture Editor's Association Writer of the Year honors.

Her individual awards for various articles, columns and blogs are too numerous to list.

Not bad for a writer who, as a then-fresh college graduate, was told by her first editor: "You won't last two weeks."

Oh, she lasted. So has the grit and determination it takes to cover the science and the realities of crop production. Her beat is often the toughest line to walk in the business, requiring the reporter to constantly dig past the press releases and promises, while also realizing they are covering the industries -- chemicals, seeds, fertilizers, equipment, technology -- that account for huge portions of a crop farmer's investment, and large swaths of advertising revenue of the typical farm publication.

No issue has been so thorny for Pam and her team as the multi-year reporting on dicamba. It's that coverage, I suspect, that was one of the sparks for a group of WSSA members to throw Pam's name in the ring for their first excellence award.

That coverage has been consummate Pam Smith. She's asked the tough questions when her peers demurred, or pandered. She's taken heat from some readers who felt her writings were too tough on a technology that is badly needed across the Soybean Belt.

She followed those criticisms not by moving to an easier subject, but by leading our writers to produce a steady stream of technical stories that gave her farmers the best practices and the latest information to use the technology as safely as possible. All the while, she and her team continued to cover the issues arising from misuse of the products.

Aaron Hager, University of Illinois weed scientist and long-time source for many of Smith's stories, put it best this week.

Congrats, Pam. We're all excited to see you get this recognition. And it's honor to share white space with you. 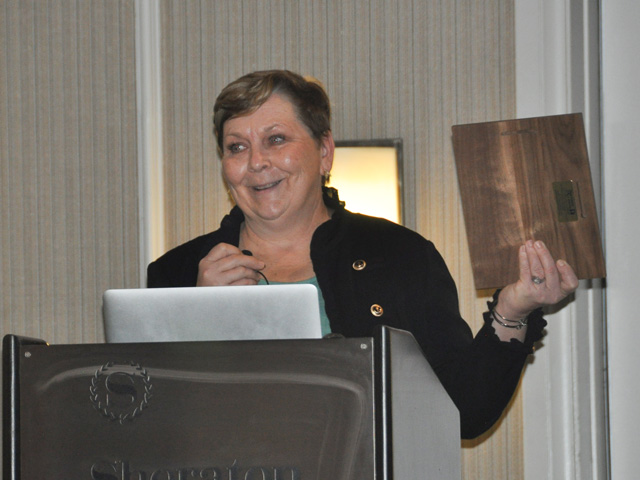