Having grain in an export position on Canada's West Coast is a desirable goal although stocks have been reported at high levels for three consecutive weeks, which has backed up movement through the system.

CN Rail's Western Canadian Grain Report for week 24 points to two Vancouver terminals facing delays in vessel arrivals in addition to a North Shore terminal facing mechanical issues. As well, rainy days have added to the delays, an issue that commodity groups would like to see resolved and is reported to be an agenda item for Transport Canada in upcoming meetings with the grain handling industry.

As a result, CN reports that 650 cars were not spotted in the country in week 24 or the week wanted for loading, due to issues faced on the coast. As well, early in week 25, the AG Transport Coalition's Daily Network Status Report as of midnight on Jan. 18 shows Vancouver unloads under pressure, a high number of 2,800 cars on site at the terminals and more than 2,000 cars on track west of the Alberta/British Columbia border. This situation showed improvement in the Daily Network Status report as of midnight Jan. 19, although daily unloads for Vancouver so far in week 25 are averaging 888 cars, down 6% from the previous week.

The blue bars on the attached chart shows Vancouver grain stocks reaching a high of 844,400 metric tons (mt) in week 23, while easing modestly to 813,700 mt in week 24. Calculations from the Grain Marketing Program shows total Vancouver capacity of 1.2755 million metric tons, while estimated working capacity is seen at 892,900 mt, or 70% of the total.

The brown line with markers represents weekly stocks as a percentage of the estimated working capacity, reported above 90% for three consecutive weeks, reaching a recent high of 94.6% in week 23 and easing to 91.1% in week 24. 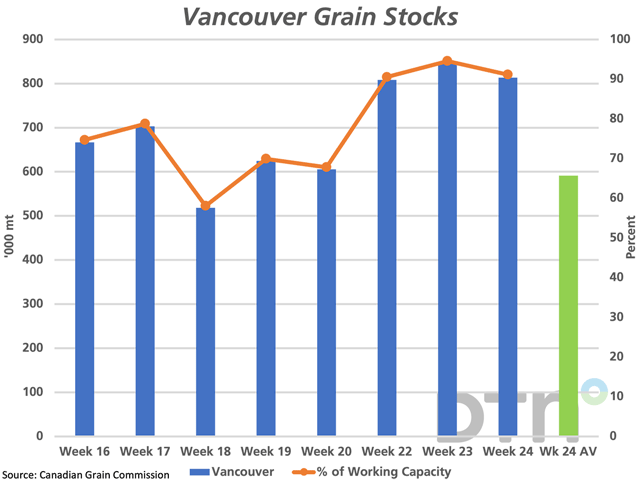