As of week 18, or the week ending Dec. 4, the AG Transport Coalition reports unfulfilled demand of 9,622 hopper cars, which includes outstanding orders, rejected cars, railway cancellations and shortened supply. This count is up 47% from one year ago, while is slightly below the five-year average for this week at 9,943 cars.

As seen with the colored bars on the attached chart, the unfulfilled demand on CN track (blue bars) is close to equal to the count on CP track (brown bars), similar to the situation reported one year ago. Prior to 2021-22 on the chart, CN tended to show the weakest data in terms of the unfulfilled demand.

While not shown, when the cancelled cars are considered by railway, we see that the two railways are also close in terms of the cars they have cancelled, which is 2,815 for CN and 2,309 for CP. When this is considered to their past performance, we see a considerable shift. The current number of CN cars cancelled during the first 18 weeks is up from 1,102 in the same period of 2021-22, while down 47% from the five-year average. The 2,309 cars cancelled by CP are up from zero cancelled in the same period of 2021-22 and 2,529% higher than the railway's five-year average. 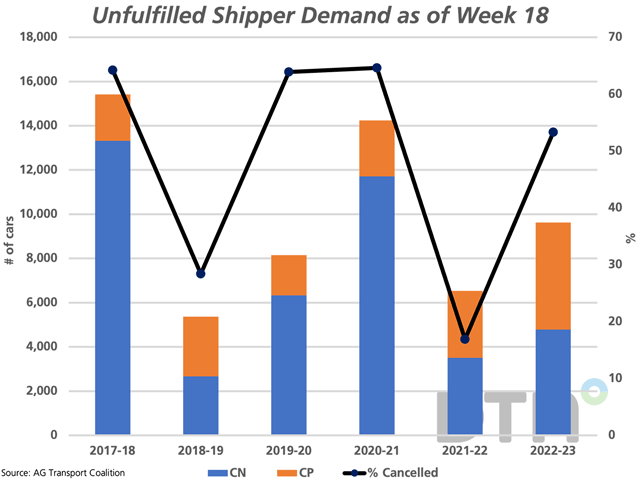