The AG Transport Coalition's Weekly Performance Update for week 13 or the week ending Oct. 30 shows the order fulfillment data for Canada's two railways converging, defined as the percentage of hopper cars spotted in the week wanted.

CN spotted 86% of the cars wanted for loading during week 13, down from 93% in the previous week, tied for the lowest percentage seen in the past five weeks while compared to the four-week average of 89.5%. This falls below the 90% threshold level used by AG Transport Coalition.

At the same time, CP Rail spotted 86% of the cars wanted for loading during week 13, up from 69% reported in the previous week and the four-week average of 75.3%, while the railway's best performance reported in eight weeks. CP's performance in week 13 matched CN's performance for the first time since week 3, or 10 weeks.

While performance is moving in the right direction overall, demand for shipping was lower and bears watching. Major shippers requested 10,459 cars for week 13, down from 12,328 reported in the previous week and the weakest demand seen in seven weeks. This number is 34% higher than the same week one year ago while 8.2% higher than the three-year average.

Also positive in week 13 data is the outstanding order count, which has fallen from 2,338 cars to 1,261 cars over the past week, the lowest in three weeks and compares to the four-week average of 1,800 cars.

Previous Post (Producer Deliveries vs. the Forecast Change in Demand)
Next Post (Weekly Canola Deliveries as of Week 13) 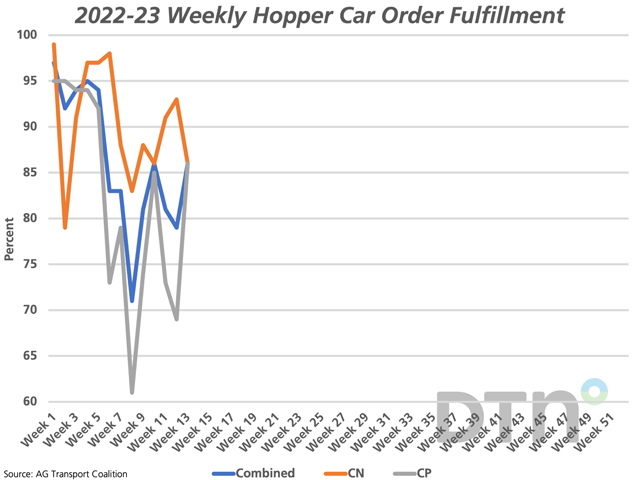