Saskatchewan Agriculture's weekly crop prices show yellow pea bids unchanged from the previous week, as of Nov. 2, at $12.75/bushel (bu) delivered to Saskatchewan plants, the highest bid seen since early July. While this is well below the $18/bu reported one year ago, it remains well above the five-year average of $9.44/bu.

The attached chart highlights the five-year seasonal trend in prices, with the seasonal high of $9.72/bu seen in week 50 of the calendar year or mid-December, while once again approaching this level in week 3 or the third week of January.

Statistics Canada data released on Nov. 3 shows total dry pea exports of 465,266 metric tons in September, up sharply from the previous month and the largest monthly volume shipped in 12 months. The total volume is the lowest September exports realized in four years. Cumulative exports of 536,261 mt during the first two months of the crop year are down 11.7% from the same period last crop year while down 23.4% from the five-year average. At the same time, cumulative dry pea exports have reached 20% of the current 2.7 million metric ton Agriculture and Agri-Food Canada (AAFC) forecast, ahead of the steady pace needed to reach this forecast.

As of the Canadian Grain Commission's week 12 Grain Statistics Weekly report, covering activity through the week ending Oct. 23, commercial stocks of peas total 301,500 mt, down from 330,800 mt reported for this week last year and the five-year average of 320,960 mt. 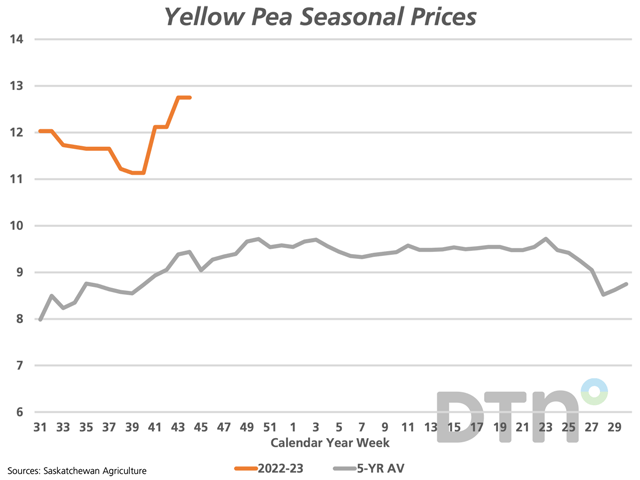