Agriculture and Agri-Food Canada's October supply and demand estimates were left unchanged for barley, although one change made saw the average price basis delivered Lethbridge for 2022-23 was increased from $370/metric ton to $400/mt, down only $32/mt from the average in 2021-22 when stocks reached an all-time low following the 2021 drought. This is despite a forecast that includes a 35.5% or 2.469 million metric ton increase in production and a 26.5% or 2.095 mmt increase in forecast supplies for 2022-23.

Domestic users will continue to fight for supplies along with the export market, with exports forecast to rise by 847,000 mt and domestic feed use to increase by 1.132 mmt, although it is early to determine just how this crop year will play out. Ending stocks are to rise by a modest 46,000 mt, from the all-time low of 504,000 mt to 550,000 mt, which would still be the second lowest on record.

As seen on the attached chart of Saskatchewan cash bids, the barley bid has risen from a low of $251.16/mt reported as of August 17 to a reported $349.76/mt reported as of Oct. 19. This has increased for five consecutive weeks and eight of the past nine weeks. The addition of the new crop has had a muted effect on the market overall, with the most recent price quoted the highest reported since June 22 when the country was moving towards the tightest stocks on record as of July 31.

This move is consistent with Alberta Agriculture's weekly data, which shows the upper end of the range traded in southern Alberta increasing for a ninth week to $455/mt, the highest seen since June 17 and down only $20/mt from the record high of $475 reached in May of this year.

For sellers, the trend is your friend and this move bears watching.

AGCanada.com is reporting three-unit trains of U.S. corn booked into southern Alberta for the first week of November. The Alberta government is reporting that the corn price in Lethbridge has increased by $4.33/mt to $481/mt over the past week, despite a drop in the December corn future over the week and a 120-basis point gain in the Canadian dollar against the USD. This month's AAFC forecast included a 500,000 mt drop in Canada's corn imports to 2 mmt for 2022-23, down from 6.2 mmt imported in 2021-22. 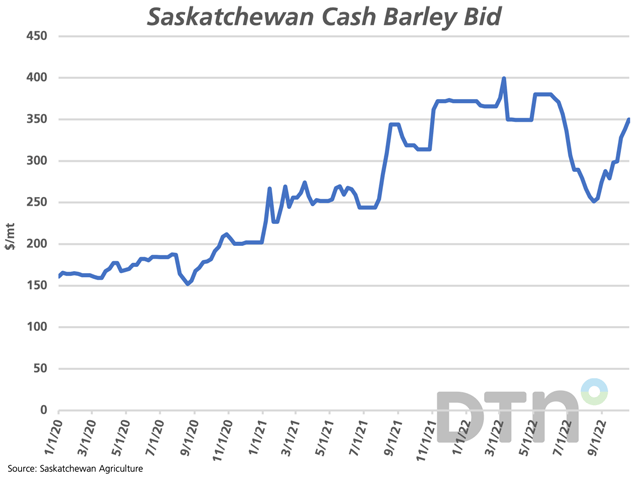