The CFTC's weekly noncommercial activity in the commodity market plays an important role in DTN's weekly strategy updates, one of six factors focused on while often the primary determinant of the market trend.

Weekly CFTC data as of Sept. 27 includes some data that is worth watching. The upper study of the attached chart shows the noncommercial net-long position in soybean oil falling by 2,424 contracts over the week ending Sept. 27, the first drop in three weeks, although this position remains bullish and close to the largest bullish position held in 14 weeks. This is of significance when comparing it to the activity in the canola market.

As seen on the second study or the red bars of the histogram, the bearish noncommercial net-short position held in canola futures was pared by 4,123 contracts, the first time in eight weeks that the size of this net-short position has fallen, now reported at 38,070 contracts. While not shown, this remains close to the largest net-short position held since June 30, 2020. Time will tell if this is a turning point; the media is starting to report discrepancies between Statistics Canada's model-based production estimates and the boots-on-the-ground method conducted by both the Alberta and Saskatchewan governments that bears watching and could swing production by over 1 million metric tons. The investment community could come to view short bearish positions as being risky, also at a time when the board crush margin is pointing to sky-high crush margins.

Noncommercial traders have taken a bullish approach when it comes to trade in wheat. While not shown, the noncommercial position in the mostly actively traded soft red winter wheat moved from a bearish net-short position to a bullish net-long position in the week ending Sept. 27, while for the first time in nine weeks (not shown).

As seen with the purple bars on the attached chart, noncommercial traders in hard red spring wheat futures have increased their bullish net-long position for four consecutive weeks to 7,302 contracts net-long, while to the largest level held in 12 weeks. In September, the USDA estimated that U.S. ending stocks of hard red spring wheat will be the lowest in 15 years, while the September reports show U.S. wheat stocks as of Sept. 1 and 2022 production both below normal. There remain varying ideas between Statistics Canada and the provinces over the prairie crop potential, while this is not lost on speculators at a time when Russia could slam the door on Ukraine exports. 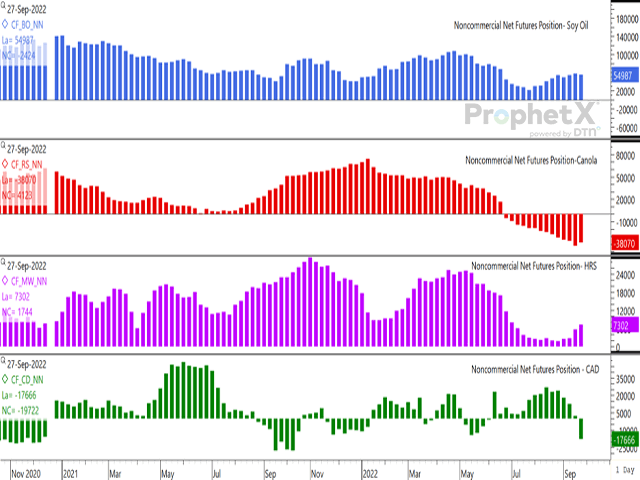