Tight grain stocks as of July 31 and a slower pace of harvest in the eastern prairies have contributed to a slow start to Canada's grain exports as of week 8, or the week ending Sept. 25. Total exports through licensed facilities total 4.2221 million metric tons, down 10.4% from last year while down 27% from the five-year average for this period.

It is early days in the crop year and demand is expected to rebound sharply following the reduced harvest of 2021-22, with added help from the ongoing slide in the Canadian dollar. The wheat projection of 15.6 mmt is not far from the current AAFC forecast of 18.2 mmt. This can change fast, especially if movement as seen in week 8 continues; Canada exported 627,800 metric tons of wheat in week 8, which may be the largest volume ever shipped in a single week. Over the past five years, an average of 15.2% of total crop year exports of wheat were achieved in the first eight weeks, a pace used to calculate the 15.6 mmt forecast.

Canola exports are off to an extremely slow start. Over the past five years, an average of 11.3% of crop year exports are achieved in the first eight weeks of the crop year, while this pace is used to project forward to a hypothetical volume for 2022-23 of 1.9 mmt, which compares to the 9.3 mmt forecast released by AAFC this month. Clearly, movement is expected to pick up and will far exceed this forecast. Commercial stocks as of week 8 increased to 1.0427 mmt but is still the lowest volume reported in three years and down 19.7% from the five-year average.

It is interesting to note that as of week 8, cumulative movement of durum, barley, peas and lentils, all much smaller crops, have surpassed the volume of canola exports, although this will not last long. 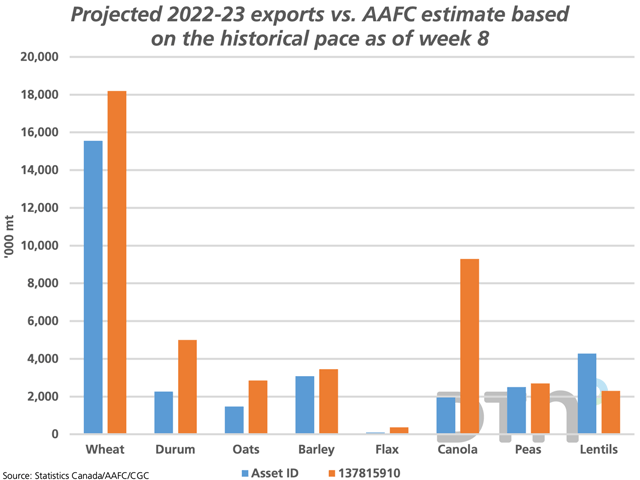