The Grain Monitoring Program Weekly Performance Update shows West Coast vessels cleared from West Coast terminals totaling 12 vessels in week 6, up from three in the previous week. The week 7 vessel lineup is reporting 21 vessels for the West Coast, down just one from the previous week while still above the one-year average of 15 per week, including both Vancouver and Prince Rupert data.

Meanwhile, the ICE Canada Canola Board Margin Index, a proxy for the returns generated crushing canola, increased by a whopping $20.94/metric ton to $320/mt ($7.26/bushel). According to a ProphetX chart approximating this index, using continuous contracts and the spot Canadian dollar, the current index is a level not seen before.

As the harvest moves forward, the November delivery basis is showing modest signs of strength, as seen in pdqinfo.ca data. As seen on the attached chart, the Sept. 1-20 data shows strength ranging from $1.97/mt in the Peace Region of Alberta to $5.02/mt in western Manitoba. Most of this change has been seen in the past two days.

PDQ's data shows that during the past five years, the average September basis has weakened by $1/mt for the Southeast Saskatchewan Region, weakened by an average of $0.51/mt for the Eastern Manitoba Region and strengthened by a modest average of $0.32/mt for the Northern Alberta Region, picking the three regions at random from the nine regions reported by PDQ.

This would indicate that on average, the November delivery basis does not tend to change significantly over the month, although this year could prove different with commercial demand inevitable.

A look at the spot basis for the Northern Alberta Region shows the basis of $20.16/mt under the November only lightly stronger than the five-year average of $22.60/mt under. 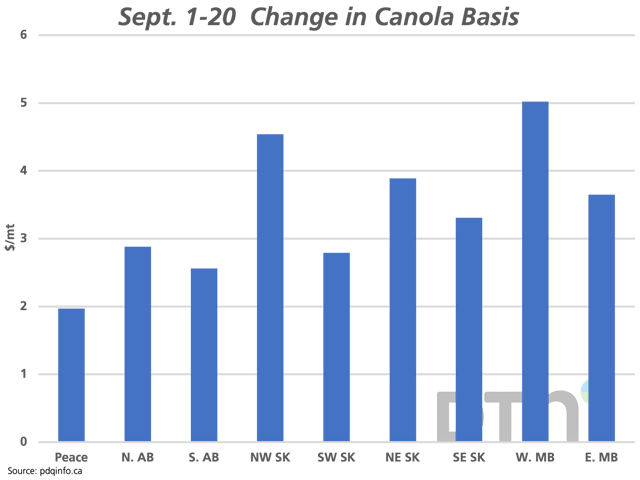