Australia's ABARES has revised higher its forecasts for 2022-23 crop production in its September estimates, with the potential for some crops to rival the record production achieved in 2021.

The agency revised its forecast for wheat production higher by 1.885 million metric tons (mmt) since its June forecast to 32.232 mmt. While this remains below the record 36.347 mmt estimated for 2021-22, it would still be the nation's second-largest crop and would compare to the nation's 24.258 mmt five-year average. In August, the USDA revised higher its forecast by 3 mmt, from 30 mmt to 33 mmt. It is interesting to note that during the past two years, Australia's final estimate averaged 9.8% higher that ABARE's September estimate, while over three years, final production averaged 4.1% lower than the September estimates.

Australia's canola potential was increased by 1 mmt from 5.607 mmt to 6.641 mmt in September. This estimate is only 121,000 metric tons below the record 6.762 mmt produced in 2021-22, while the five-year average is calculated at 4.015 mmt. Chances of even higher production are quite possible; during the past two years, the final production estimate was 26.8% higher than the September estimate, while over three years, the final estimate is 17.8% higher than the September estimate. Estimated yield is clearly expected to be lower than realized in 2021, with seeded acres estimated to reach a record 8.9 million acres, up 12.3% from the previous year.

An estimated record 1.423 million acres of lentils will be planted in Australia, leading to record production 924,000 mt, according to the country's agriculture ministry. This would be up a 7.6% to a fresh record level of production, up 47% from the five-year average. Over the past three years, the final production estimate has averaged 34% higher than the September estimate, indicating the potential for further upward revisions ahead.

Australia's barley production was estimated at 12.253 mmt, up from the 10.886 mmt forecast in June. While seeded acres and production are forecast to fall for a second consecutive year, this forecast remains 7.9% higher than the five-year average. During the past three years, the final production estimate was higher than the September forecast in each year, averaging 13.4% higher overall. 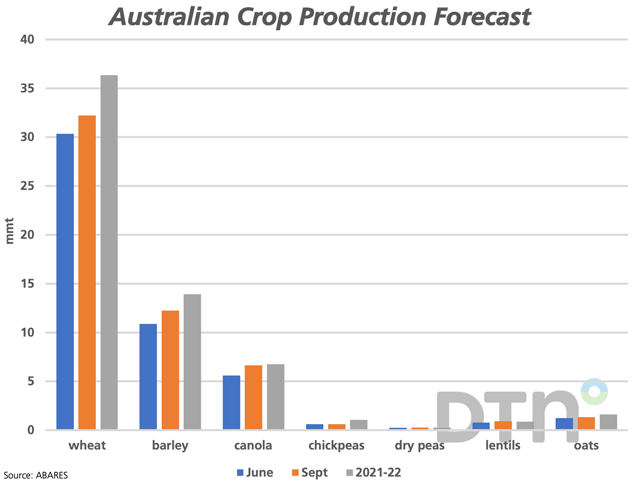