Based on the upper end of the weekly range of southern Alberta feed barley prices reported by Alberta Agriculture, price has fallen from a high of $475/metric ton in May to $390/mt for the week ending August 5. This is the upper end of a $32/mt range reported for the week, while private reports have shown the Lethbridge trade as low as $365/mt this week.

Agriculture and Agri-Food Canada has estimated this price to average $380/mt for the 2022-23 crop year, down $55/mt from their forecast for the 2021-22 crop year. Despite lower seeded acres in 2022, production is forecast to rise significantly due to an increase in forecast yields, while ending stocks are to nudge higher but remain close to the record low reached in 2021-22.

While supplies will clearly be sharply higher than the drought-reduced crop realized in 2021, the demand side of the equation will be difficult to forecast. AAFC's current forecast shows exports increasing by 18% to 3.050 million metric tons and feed use to increase by 24% to 5.367 mmt.

China's actions early this crop year bears watching. Statistics Canada data for the first 11 months of 2021-22 (Aug-June) shows barley exports to China at 1.609 mmt, which compares to 3.259 mmt exported to China in 2020-21. China's continued ban on Australian barley along with a continued trickle from Ukraine could leave Canada an attractive source of barley.

In addition, the state of the U.S. corn crop bears watching. While the USDA is expected to reduce its forecast yield slightly on August 12, this week's DTN Digital Yield Tour, powered by Gro Intelligence, came up with an average yield of 167.2 bushels per acre, well below the official 177 bpa used by USDA. Should corn prices correct to the upside, barley will follow.

A southern Alberta broker has reported more than 6,000 mt of barley traded into southern Alberta at $367/mt, spread over the October through March period. This is below the $380/mt average forecast by AAFC, potentially signaling a much larger crop is on the way than forecast, although perhaps wise positioning on the part of a buyer ahead of the volatility to follow. 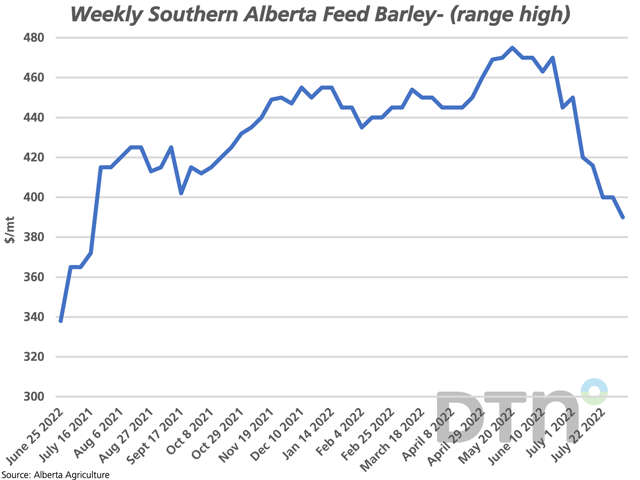