Alberta Agriculture's latest Crop Report as of July 26 shows the estimated yield at 114% of the five-year yield index and 110% of the 10-year yield index. Results vary widely across the five regions of the province, ranging from 101% of the five-year index in the North-West Region to 125% in the Peace Region. This estimate was followed by close to a week of extreme temperatures across the province.

As seen on the attached chart, Alberta Agriculture's estimates, on average over the past five years, have increased from the first estimate in late July/early August to the final estimate of the season, as seen by the blue bars for select crops. The five-year average shows the barley yield increases by 2.7 bpa, spring wheat by 1.2 bpa, canola by .6 bpa and dry peas by .3% from the first to the last estimate of the season.

The brown bars on the attached chart show the five-year average yield difference from Alberta Agriculture's first yield estimates to the final official estimates from Statistics Canada, which are also expanded to include irrigated acres. The difference is even greater for spring wheat (4 bpa), barley (5.3 bpa) and canola (1.1 bpa), while the average dry pea yield estimate fell by 1.7 bpa.

One crop that bears watching is the province's canola crop, with an estimated 28% of the crop podding compared to the 10-year average of 56%, with the report noting "field specific lack of pod formation," with the crop viewed as "highly variable and inconsistent." 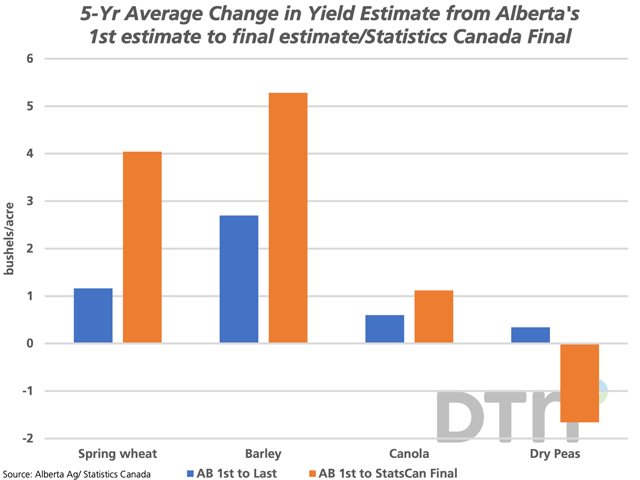