If timing is everything, one could conclude that Canada's federal government's climate targets as they relate to both energy and agriculture may be ill-timed and one only has to read the headlines of a daily paper to see the growing concerns of both global food and energy security issues which the world is facing.

On April 12, Agriculture and Agri-Food Canada held an online Town Hall on the Fertilizer Emissions Reduction Plan, a part of the government's ongoing consultation process that included an earlier released discussion paper and an online feedback form with June 3 set as the deadline for submissions. (https://agr.survey-sondage.ca/…)

As stated in the context for the Town Hall, the government is committed to:

2) Working with fertilizer manufacturers, farmers, provinces and territories, to develop an approach to meet it.

The country's first Emissions Reduction Plan was released in March 2022.

Opening statements from AAFC officials noted the agency's view of farmers as stewards of the land, highly productive and meeting the needs of the world. The government recognizes the advancements already made by producers, but more needs to be done to address climate change and working together, said AFFC, adding that Canada could lead in becoming a sustainable agriculture producer.

It is important to note that the government stated:

1) This target is not about establishing a mandatory reduction in fertilizer use.

2) Emission reductions could be achieved through continued and expanded use of new products, beneficial management practices and technologies that can optimize nutrient management while maintaining or improving yield.

It is interesting to note that the Discussion Paper states "Between 2005 and 2019, fertilizer use increased by 71% in Canada, primarily driven by growing fertilizer sales in Western Canada." The government said that it won't force a reduction in use, while at the same time are quick to note the growth in sales.

Industry questions and statements indicated concerns in this week's webinar.

Tom Steve, of the Alberta Wheat and Barley Commission, noted that he is encouraged that there is no change proposed in the absolute level of fertilizer used, while stressing the growing issue of global food security and that any initiatives that could reduce production would be a concern. Climate concerns must be balanced with global food security concerns.

A speaker from the Canola Council of Canada commented that the explosive growth in canola crush capacity on the Prairies along with the addition of renewable diesel production hinges on increased canola acres and increased yields. There also remains concerns surrounding data availability and accuracy.

Sheri Stryhorst, of the Alberta Wheat and Barley Commission, noted the challenge in increasing adoption of government initiatives, while also pointing to her research pertaining to the price difference between urea and enhanced efficiency fertilizers offered at the retail level. Unfortunately, the connection was poor, the comments were garbled. The government moderators acknowledged her concern, but did not ask for this information to be repeated for the record.

One comment made indicated the similarities in the government language used with that seen coming from the European Union. AAFC stressed that there is no mandate to reduce fertilizer use, while this is a "Canadian initiative to address a unique circumstance" that will not impede crop yields or economics.

Other comments from the audience:

-- This can't be a one-size fits all approach, noting differences between Ontario versus prairie crop production;

-- The accuracy of emissions measurements was questioned. How can you ask producers to adopt if you can't measure the outcomes?

-- AAFC's chart titled Average Emissions Intensity for Cereal Crops (excluding rice) 2005-2017 shows Canada's emission intensity higher than all other countries, which was said to be erroneous by one participant.

-- If enhanced fertilizers work so well, why are they not already adopted? The timing of nutrient release was also noted, which can be ineffective for some crops in some areas.

Ironically, this webinar took place on the same day that the Toronto Sun reported that the federal government is proposing a tax on trucks and sport utility vehicles. The level of taxation reported is $1,000 for a Ford F-150 and a $4,000 tax for a Dodge Ram 3500 heavy duty pickup. There is no stone left unturned in the government's quest to reach its climate targets, while this move will throw fuel on the fire for those who see the government attacking rural lifestyles and working people.

Many parallels can also be drawn with Canada's energy industry. While the world is asking for more Canadian energy products and U.S. senator Joe Manchin toured Alberta's oilsands this week, Prime Minister Justin Trudeau was in Vancouver pitching electric cars and the government is also working on a "just transition" program to move energy workers in the west out of energy production and into green jobs.

On April 12, Ron Wallace of the MacDonald Laurier Institute told QR77 talk radio that "any energy transition will be far more difficult to achieve than most political leaders presently comprehend or are even willing to admit." He goes on to say that leaders must consider "the practicality, the feasibility and the consequences of an excessively rapid wholesale transition of the global energy system and the economic impacts that are falling out from it."

Government leaders must view agriculture in the same fashion. Climate change goals cannot be allowed to collide with the food inflation and food security issues that the world is facing, just as they should not be allowed to trump energy security concerns. 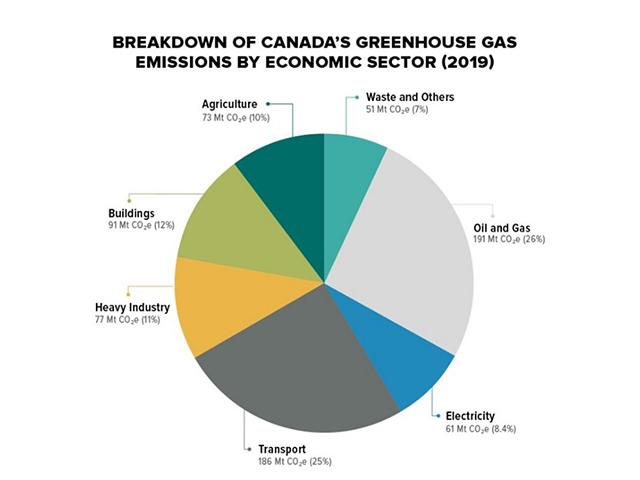