The Canadian Grain Commission reported a sharp 26% drop in licensed terminal unloads in week 41 to 817,000 metric tons, which was the lowest reported in seven weeks. This is noted on the attached chart by a dip below the volume reported for 2018-19 as well as the three-year average as seen on the blue line.

The week 42 report noted large revisions in data reported by grain handlers, which shifts this line well-above recent year volumes, with 1.1143 million metric tons unloaded across all licensed terminals, the largest volume unloaded in three weeks. The largest week-over-week increase was seen in a 168,800 mt or 42.6% increase in wheat unloads (excluding durum) to 549,800 mt, or 51.6% of the total, along with an 80,700 mt or 58.5% week-over-week increase in canola unloads.

Despite challenges faced over this period, total unloads are calculated at 11.909 mmt over this period (week 30 to week 42), up 14.5% over the same period last crop year and 15.6% higher than the three-year average.

A combination of favorable rail movement and slowing producer deliveries through spring seeding has resulted in primary elevator stocks continuing to fall. As of week 42, the grain in storage of 2.5491 mmt accounts for 49.9% of the estimated working capacity on the Prairies. This is down from 61% of estimated working capacity reported the previous week and down sharply from the 91.1% reached in week 33. Prairie space is viewed as good as we move into the summer months.

This week's poll asks what you think the government can do to tame food inflation, as recently experienced due to the COVID-19 pandemic? Please weigh in with your thoughts on this poll on your DTN Canada Home Page. 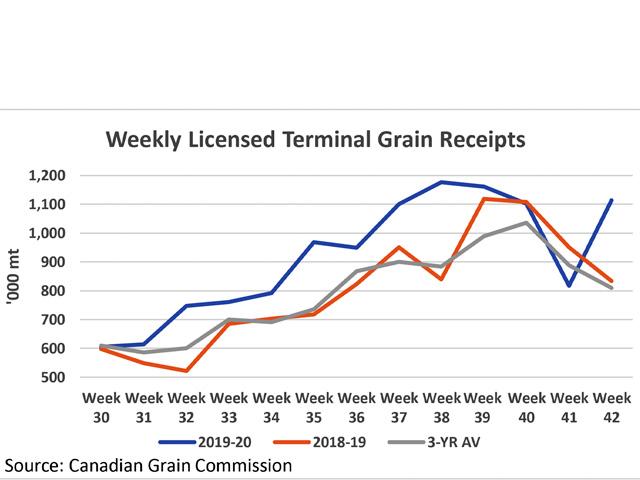