A number of concerns were expressed in the media following the release of the March intentions seeded acres report, with some suggesting the estimates were simply wrong. Friday's June estimates, on the other hand, seem more aligned with the range of pre-report estimates being reported by the media. Exceptions may be seen with barley acres, with the June 29 estimate of 6.499 million acres just slightly higher than the range of trade estimates, while the estimated soybean area of 6.320 million acres is just slightly lower than the range of pre-report estimates.

In 2017, Canada's estimated record canola acreage exceeded the country's all-wheat area by 606,000 acres, the first time that canola's acreage had exceeded that of wheat and durum combined. An estimated 1% drop in canola acres seeded in 2018 to 22.7 million acres, along with an estimated 10.4% increase in all-wheat acres to 24.7 million acres (up 18.8% for durum and 9.5% for spring wheat), has wheat acres back on top based on Friday's estimates by roughly 2 million acres. It is interesting to note, however, that over the past five years, estimated canola acres were revised higher from the June estimate to the final estimate in each of the five years, averaging a 3.2% increase.

The attached map released by Statistics Canada shows the top three crops in terms of seeded area for each province. Wheat and canola acres top the list in each of the three Prairie Provinces, although not in the same order given that canola acres are estimated to top wheat acres in Manitoba only. Soybeans and corn are the two primary crops in both Ontario and Quebec.

Given that current government estimates are pointing to a large year-over-year increase in ending stocks for a number of grains, this week's poll asks which of these crops you are least likely to market prior to new-crop arrival. Please weigh in with your thoughts on this week's poll, found at the lower right of your DTN Canada Home Page. Thanks for your participation. 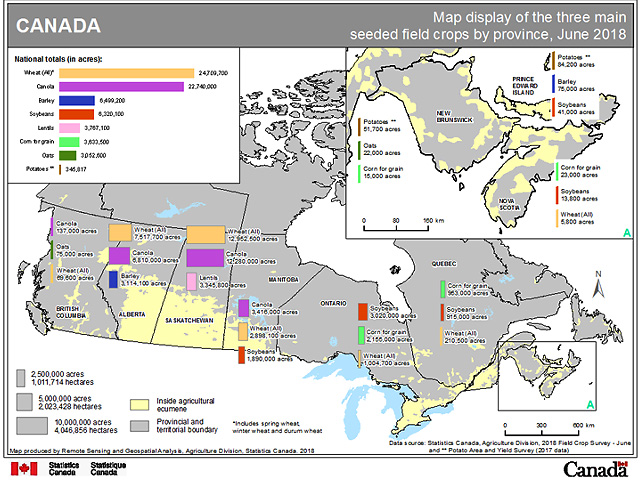