The attached chart shows the trend in the Crop Condition Index for selected Saskatchewan crops during the past two weeks, while making comparisons with the same week in 2017 as well as the five-year average for the last week in June. DTN's methodology for calculating the crop condition index (CCI) is show as:

Given this formula, the CCI ranges for the selected crops ranges from 196 for winter cereals to a low of 141 for durum. Of the crops shown, all crops except for the winter cereals and flax have shown signs of deterioration over the past two weeks, with some of the largest drops seen in lentils with a drop of 28 points, soybeans and barley, both dropping by 16 points, and durum dropping 14 points.

To gain an understanding of how quickly things are deteriorating in the driest Southwest Region of the province, we see that over this two-week period the CCI for spring wheat fell by 35 points to 131 (183), while the durum CCI is shown down 19 points to 124 (141) and the canola CCI fell by 63 points to a CCI of 66 (162), with the provincial average in brackets. The government's cropland topsoil moisture rating shows only 49% adequate, with 51% Short to Very Short.

Despite this, the CCI for almost the entire group of selected crops remains above their respective year-ago value, with lentils being an exception. Spring wheat is 14 points higher than this time last year, canola is 17 points higher while lentils are 9 points lower.

Rains that are more general are needed across the province to facilitate crop development in the drier areas of the southwest and west-central regions.

Given that current government estimates are pointing to a large year-over-year increase in ending stocks for a number of grains, this week's poll asks which of these crops you are least likely to market prior to new-crop arrival. Please weigh in with your thoughts on this week's poll, found at the lower right of your DTN Canada Home Page. Thanks for your participation. 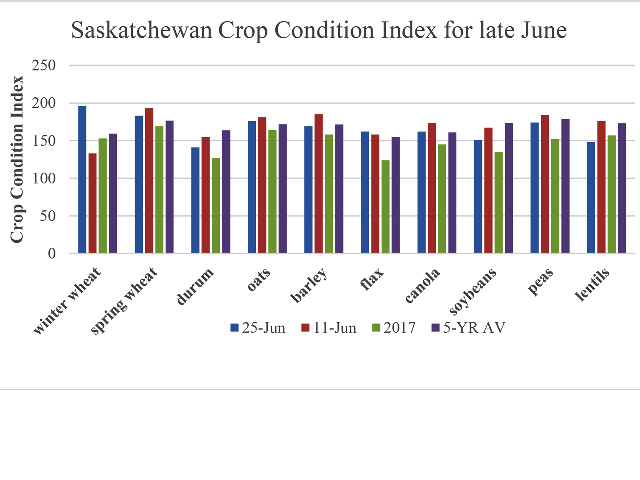