India's recent release of the 4th Advance Estimates contain a number of production records seen across individual crops, while total foodgrain production is shown at a record 275.68 million metric tons, up 2.3 mmt from the last estimate released in May and 24.11 mmt or 9.6% higher than reported for 2015/16.

The record production achieved in 2016/17 will be a hard act to follow. Focus remains on the summer or kharif crop that is currently being planted, with activity nearing an end. The pace of planting for the kharif crop was seen to slow as of the Aug. 11 estimates released by India's government relative to last year's pace, while as of the Aug. 18 weekly data, pulse planting had reached 32.3 million acres, down 3.5% from the same date last year.

India's Meteorological Department (IMD) shows the Southwest monsoon delivering 5% less precipitation than the long-term average for the entire country as of August 21, which ranges from 3% above normal in the East and Northeast to 12% below average in the south. Cumulative rainfall in the June 1-through-August 16 period shows 20 of 36 subdivisions having received normal moisture while 10 of the 36 subdivisions classed as deficient.

Given the upward revision in production, the Hindu BusinessLine reported on Monday that the government has acted to limit imports of two specific pulses, moong and urad, in an attempt to support domestic prices. This follows a similar move which saw an import limit placed on another specific pulse, pigeon peas. This move alone is taking credit for a 20% increase in pigeon pea wholesale prices in one particular market, as reported by the Economic Times and will be well-supported by producers. An expansion of similar protectionist measures remains a risk for North American exporters, although the potential for the 2017/18 kharif crop and the larger rabi crop will play a major role.

What do you think of Canada's federal government proposed tax changes? Will they affect you? Please share your thoughts on this week's poll, found at the lower right of your Canadian DTN Home Page. 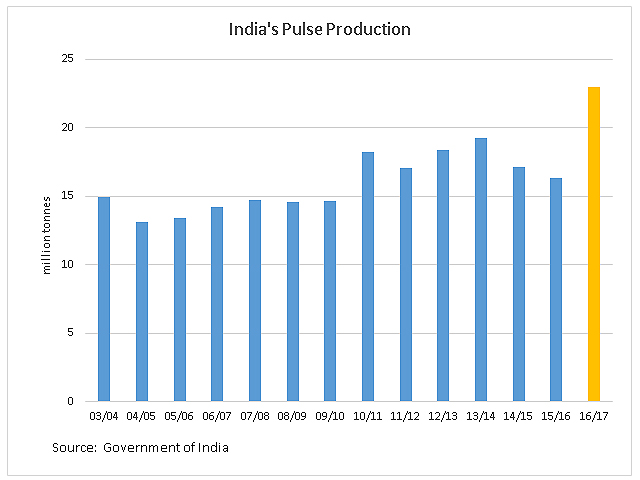