Trading weather markets is not for the faint of heart and sentiment can change on a dime. We may see a hint of this in Wednesday's spring wheat trade, with the September/December and December/March spreads moving from a bullish inverse to a weak carry in Wednesday's trade. The Sept/Dec spread (gold line on the attached chart) moved from a 1/2 cent inverse on Monday to a 1/4 cent inverse on Tuesday while ending at a one-cent carry on Wednesday (December trading above the September). This is a sign of commercial selling as tensions ease given the call for rain to hit the Prairies and Plains over the next seven days. National Weather Service maps show the greatest accumulations expected to hit northwest Alberta as well as along the Canada/U.S. border from Montana to Minnesota.

This uncertainty follows the June 4 United States spring wheat condition report which led to a DTN Crop Condition Index (CCI) of 137, which was 11 points lower than the previous week and the lowest rating for that particular week seen in available USDA data going back to 1995. The five-year average for this week is calculated at 172.6.

Further reason for concern are seen in other North Dakota crops, to pick one state, with the crop condition index for the state's oats at 101 in the latest report, down from the five-year average of 184.4. The CCI for durum is calculated at 102, with three of five years showing data for this week leading to an average of 186.

Rain makes grain, but will it be enough? DTN Senior Ag Meteorologist Bryce Anderson said, "Take those rainfall amounts that you see (on the seven-day NOAA precipitation map), cut them in half, and that's about where things will max out." An inch of moisture may be in store, which is well below government forecasts for along the border. In the meantime, we can only watch the spreads for indications of how commercial traders will react from day to day and how it relates to the direction of the market.

This week's poll asks which crop you believe will require the greatest focus and attention to detail when it comes to price risk management in the upcoming crop year. You can respond to this poll, found on the lower right of your DTN Home Page. Thanks to all for their past contributions to weekly polls. 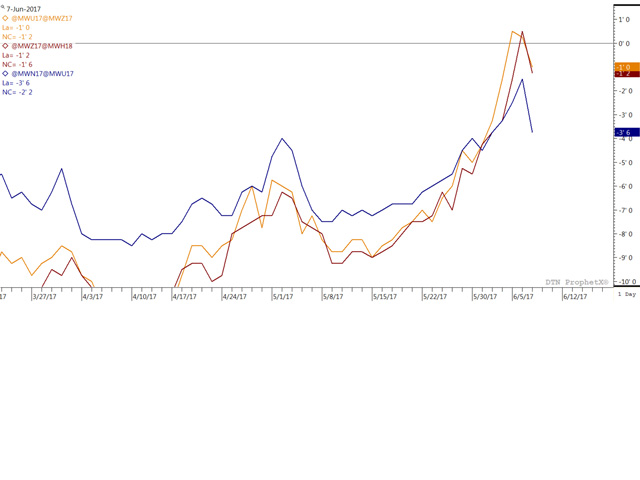