India's Agriculture Ministry released their Third Advance Estimates on Tuesday with record crop production being the common theme for 2016/17. The country produced a record food grain production of 273.4 mmt, with record rice production accompanied by record production for wheat, corn and pulse crops. The government statement attributes this to "very good rainfall during monsoon 2016 and various policy initiatives taken by the government."

An expansion of pulse acres along with favorable moisture and improved yields led to a total pulse crop estimate for the year of 22.4 million metric tons, higher than the Second Advance Estimate of 22.14 mmt released in February and well above the 20.75-mmt target set for the crop year. This volume is 4.77 mmt higher than the five-year average and 6.05 mmt higher than the estimated production in 2015/16 production of 16.35 mmt. The previous record was set in 2013/14 at 19.25 mmt.

One recent media report from India suggests that India's pulse imports will reach a record high of 5.67 mmt in 2016/17, up 19.9% from the previous year, although the rebound to a record level of production is estimated to trim 2017/18 imports of all pulses by 20%, with consumption estimated at 24 mmt. One recent Twitter communication is questioning this year's 20% increase in imports despite a 35% increase in production. Pravin Dongre, chairman of India Pulses and Grains, told the online Business Standard that importers had significant positions on well before it was realized the crop was as large as it was which had to be honored. A further explanation pointed to the import of yellow peas, which are produced in small volumes in India. Regardless, Prairie prices could face further pressure.

On Monday, Saskatchewan Pulse Growers released an update on market access to India's market. As it stands, normalized trade will continue until June 30, at which time new fumigation rules are introduced which require Canada to fumigate all product prior to shipping, which will place Canada at a disadvantage given the colder climate and the ineffectiveness of the treatment in colder temperatures. Pulse Canada continues to work with the government of Canada to seek resolution to this matter. 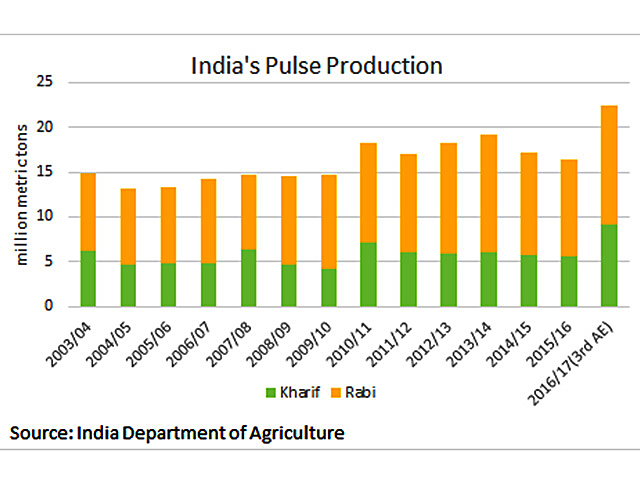