The Canadian dollar held close to $.73 CAD/USD on Monday (black line), while Friday's CFTC data shows investors adding to their bearish net-short futures position for the sixth consecutive week, as indicated by the red bars of the histogram on the attached chart, measured against the left-hand vertical axis. The current net-short position of 47,704 contracts is the largest net-short position held since February 2016.

This is the longest bearish trend seen since a seven-week move was realized between November 2015 and January 2016. The current trend began with a sudden change in sentiment with a move from a net-long position of 21,458 contracts held during the week of March 14, to a net-short the following week of 24,403 contracts. Since then, the weekly surge in the net-short position has been the greatest in the past two weeks, increasing by 28% in the week ending April 25 and by 12% in the week ending May 2.

Super-imposing the trend in the spot Canadian dollar (black line) we can see the impact that this noncommercial sentiment has on the exchange rate. The spot Canadian dollar reached a 2016 low of $.68296 CAD/USD on January 20, which corresponds with the noncommercial net-short of 66,819 contracts, reached on the following week of Jan. 26. The current move has led to headlines that refer to the loonie as "the ugly duckling" and being the poorest performer of the world's major currencies.

Looking at the spot Canadian dollar chart, last week's move saw support at $.72716 CAD/USD breached over the week but held in the end, which is the 61.8% retracement of the move from the January 2016 low to the April 2016 high. A breach of this level could result in a test of the 67% retracement of the same uptrend, found at $.72114 CAD/US. Both daily and weekly stochastics are found in oversold territory, which may discourage speculators from further heavy selling.

At the same time, there is reason for concern on the part of speculators. Canada's real-estate sector is reported to be a bubble. Mortgage lender Home Capital is fighting to stay alive while facing a run on deposits. U.S. protectionist threats could spell bad news in the Canadian economy. On the weekend, Prime Minister Justin Trudeau suggested the federal government might be open to retaliation on U.S. softwood lumber tariffs, while the Globe and Mail reports U.S. Commerce Secretary Wilbur Ross suggesting that such a move would be "inappropriate." Lastly, weekend data from China indicates a slowing growth in imports in April, failing to meet expectations. All of this gives loonie bears reason for further caution. 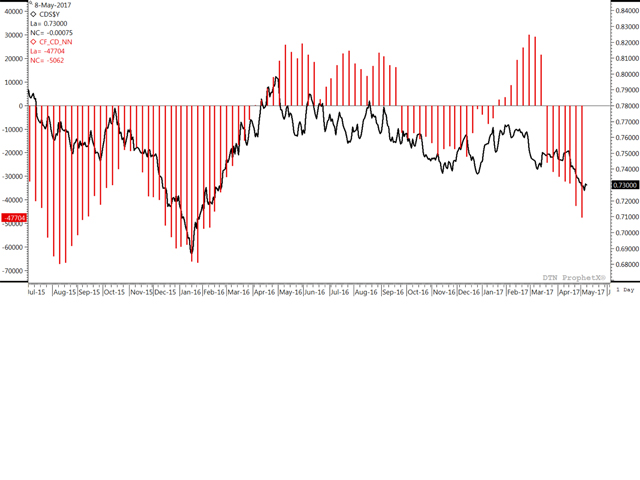