Friday's Alberta Agriculture report, as of October 4, shows the 2016 harvest near last year's pace but still remains well-behind the five-year average. As of Oct. 4, 69% of the total crop is estimated to have been harvested, just slightly behind the 72.66% harvested as of the same date last year. However, this is still behind the 83.3% average realized over the past five years.

The Thanksgiving holiday weekend saw snow blanket southern Alberta, while Friday's forecast shows as much as another 10 centimeters of snow expected for northern areas. DTN's Five-Day Highs Compared to Normal shows daily highs to remain 4 to 6 degrees Celsius below normal with a lack of drying weather needed to support harvest in the short term.

By crop, 83.3% of the durum is harvested as of Oct. 4, along with 70.5% of the spring wheat, 68.7% of the barley, 61.8% of the canola and 47% of the oats has been binned. Given Statistics Canada's harvested acre estimates, combined with Alberta Agriculture's latest yield estimate, the volume of spring wheat yet to be taken off can be estimated at 2.3 million metric tons, while 2.2 mmt of canola and 1.4 mmt of barley yet to be binned.

A similar look at Saskatchewan's crop to be taken off, as of Oct. 3, reported in this space last week pointed to as much as 2.2 mmt of canola to be harvested, along with 1.7 mmt of spring wheat and 1.6 mmt of durum.

While there may be no signs of panic seen in any markets, there's many market signals that bear watching. November canola is knocking on the door of resistance in the $175 to $176.50/mt region. December oats cracked the $2/bu. mark on Tuesday for the first time since August 1, although narrowly failed to sustain gains above this level. While the MGEX December spring wheat contract has consolidated so far this week, Minneapolis basis has strengthened to reflect the poor quality of both the prairie harvest and the low protein hard red winter crop in the U.S. On Sept. 1, the Minneapolis bid for 14% protein Dark Northern Spring was reported at 60 to 80 cents over the December contract, while was reported at $1.30 to $1.50 USD/bu. over today. As well, last week's close on the December HRS contract showed a gain of 8.7% from the low reached on Aug. 31.

What do you think of the federal government's new carbon pricing plan? You can share your thoughts on this week's 360 Poll, found at the lower-right side of your DTN Homepage. We thank you and value your opinion. 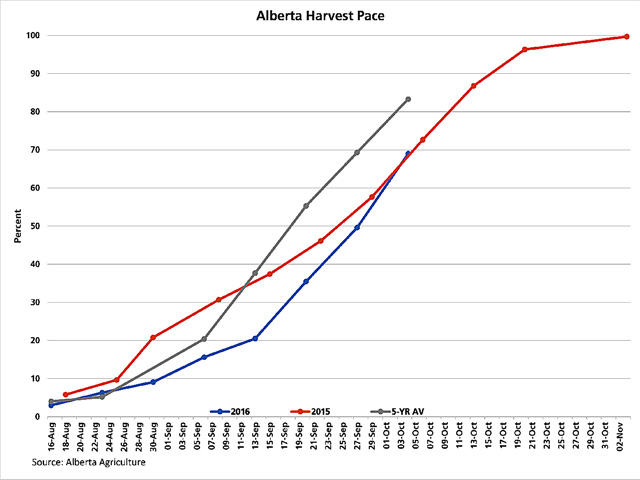