It was late-session selling which led to a close in negative territory for the December oat contract, which ended one cent lower at $1.98 per bushel. This came after the session high reached $2.03/bu., a test of the August 1 high, while the modest loss comes despite much greater losses seen in wheat, corn and soybeans and a higher U.S. dollar trade which weighed on commodities.

Today's USDA report saw both U.S. planted and harvested acres fall by 200,000 from September, while estimated production was dropped by 12 million bushels from last month to 65 mb, a three-year low. Imports of oats, a key market for Canadian product, were left unchanged from September at 90 mb (1.4 million metric tons), 4.7% higher than 2015/16 but still below the five-year average calculated at almost 96 mb. U.S. ending stocks were revised 7 mb lower this month to 47 mb, down 17.5% from last year, but still slightly higher than the five-year average. U.S. stocks as a percentage of use is calculated at 28%, down from 33% last year and equal to the five-year average.

The second study shows that stochastic momentum indicators on the daily chart are in overbought territory, providing a sell signal for technical traders.

As seen by the black line in the third study, the December/March spread closed at minus 2 cents on Wednesday, pointing to aggressive commercial buying interest with the spread trading at a weak 15 cents as of Sept. 6. At the same time, the green bars of the histogram seen on the lower study shows CFTC data pointing to noncommercial traders holding a bearish net-short futures position of 1,362 contracts as of Oct. 4 which is close to the Sept. 20 net-short futures position of 1,406 contracts, the largest net-short held since August 2015. Should this group eventually give-up on this position, this market could be further supported as it nears a test of resistance.

The December oat price continues to test psychological resistance of $2/bu. as well as nearing technical resistance at $2.05/bu., the contract's 200-day moving average, along with $2.05 1/2/bu., the 23.6% retracement of the move from the December contract high to contract low. A move above this level could result in a continued move to $2.27/bu., the 38.2% retracement of the same downtrend.

The delayed harvest on the Prairies could continue to support prices. Most recent provincial crop reports show 13% of Saskatchewan oats yet to be harvested, while Albert's report indicated 53% of the province's crop to be harvested. Excessive rains over the Prairies since the beginning of harvest will surely tighten quality supplies.

What do you think of the federal government's new carbon pricing plan? You can share your thoughts on this week's 360 Poll, found at the lower-right side of your DTN Homepage. We thank you and value your opinion. 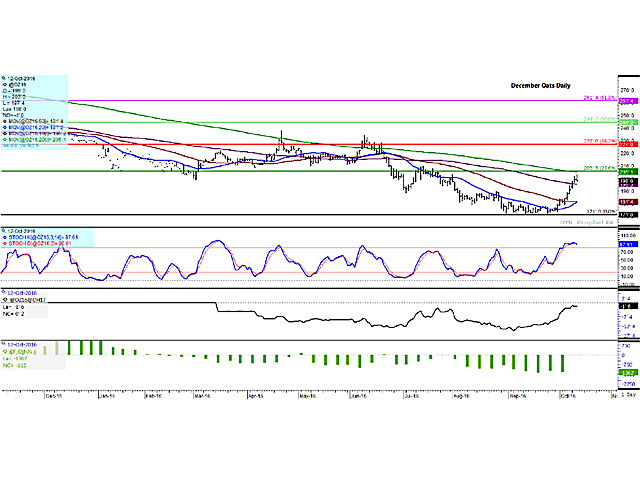