Canadian Canola Processors weekly crush data shows 169,173 metric tons crushed in the week ending September 7, the highest weekly volume processed this crop year or since August 1. For the second straight week, the weekly volume processed exceeded the volume needed this week in order to stay onion track to reach the current Agriculture and Agri-Food Canada target of 8 million metric tons, as indicated by the green bars on the attached chart rising above the nearly horizontal blue line.

A journalist asked me this week about Canada's production and exports of canola oil as a means of getting around the trade issues with China. This could eventually see China lower the tolerance of foreign material to 1% from the current 2.5% tolerance on canola imports.

While Canada's long-term outlook for vegetable oil remains bright, supported by Richardson's recent announcement to upgrade the capacity at their Lethbridge Alberta plant, it doesn't seem like a likely solution for Canada's current trade issue with China. As reported by the USDA Aug. 30, China sold 2.28 mmt of its "aged" rapeseed oil reserves as of June 1, representing just 35.6% of its total reserves, which is expected to have an impact on vegetable oil needs in 2016/17. There remains speculation that the existence of these internal supplies could be behind the move to slow Canada's exports of seed to China.

An interesting piece by producer.com writers suggests that the best possible outcome for Canada will be achieved by finding new markets for canola. This would call China's bluff over whether it can access readily available supplies elsewhere; it would also further strengthen Canada's bargaining position as China faces growing competition for supplies.

While not shown on the attached chart, weekly CGC statistics show 167,500 mt of canola exported in week 5 or the week ending Sept. 4. This is the largest weekly volume seen this crop year, although still below the 178,500 mt needed this week to reach the current 9 mmt export target set by AAFC in August. Given the higher-than-expected stocks reported by Statistics Canada, there is a likelihood that this export target will be increased accordingly. Year-to-date, 633,000 mt of canola has been exported, down 1.5% from the same period in 2015 and roughly 232,000 mt behind the steady pace needed to reach the 9 mmt target for the year

One customer reports a $10 bid for canola available in central Saskatchewan, which represents close to $25/mt under the November, given today's close, which is aggressive given the average prairie basis which is closer to $39/mt under and may be a sign of things to come. While the dispute with China will continue to hang over the market, market commentary seems further deflated by this week's news of a greater-than-expected 2 mmt carryout as of July 31. Do note that the November closed a modest $1.40/mt lower the day of the report, while has gained $6.30/mt in the two sessions following the report. As well, the Jan/March and March/May futures spreads were unchanged over the week, while the May/July weakened just $.20/mt, indicating that commercial sentiment has not changed.

While there are no clear bullish signals for the market, one only has to look back one crop year to see demand of over 18.5 mmt to know that stocks do have the potential to tighten substantially over the next year. 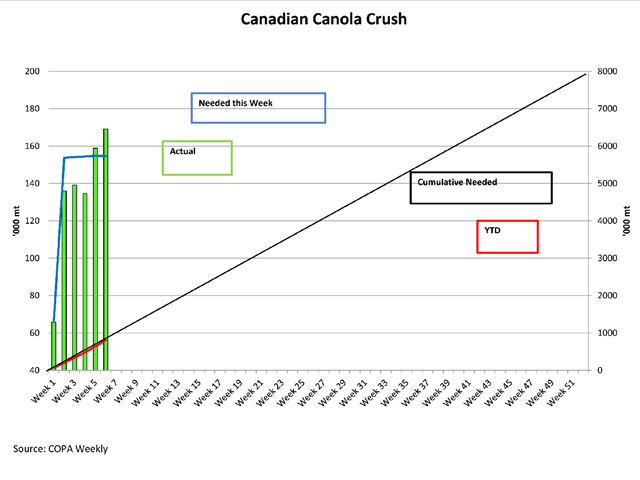