As of Sept. 5, Saskatchewan Agriculture reports the province's harvest at 32% complete, up from 18% reported a week ago and the largest weekly gain seen this season. This is above the five-year average of 28% complete, while an additional 38% is in the swath or is ready to straight combine, also up from the five-year average of 30.6% for the same week. Several areas received moisture over the past week, with 10% the province reporting surplus topsoil moisture conditions, an area which has decreased each of the past four weeks from the 26% reported Aug. 8.

The government's report points to the quality challenges which the industry will face over the upcoming marketing year although further progress will be needed prior to overall quality estimates for the Prairies.

Two of the largest swings in official estimates to come may be seen in the durum and dry pea estimates. While Statistics Canada pegged the Saskatchewan durum crop at 40.7 bushels per acre, Sask Ag estimated the provincial average at 45 bpa in August and increased that by 1 to 46 bpa as of Sept. 5. The same can be said for peas, with the Statistics Canada estimate reported at 37 bpa while the August provincial report shows this estimate at 40 bpa with an increase to 42 bpa in today's report.

While this may be the case for the province's largest crops, it is not the case for all crops. Sask Ag has reduced its estimate for soybeans to 27 bpa today from 29 bpa in August, which is below the 28 bpa Statistics Canada estimate. The lentil crop has long been a subject of discussion given its dislike for excessive moisture, reduced from 1,250 pounds/acre to 1,200 pounds per acre today by Sask Ag, down from the 1,283 pounds per acre estimated by Statistics Canada.

This week's poll asks what you are seeing or hearing regarding results from this year's harvest to-date. Please feel free to share your thoughts on this week's poll, found at the lower-right of your DTN Home Page. We thank you for your interest! 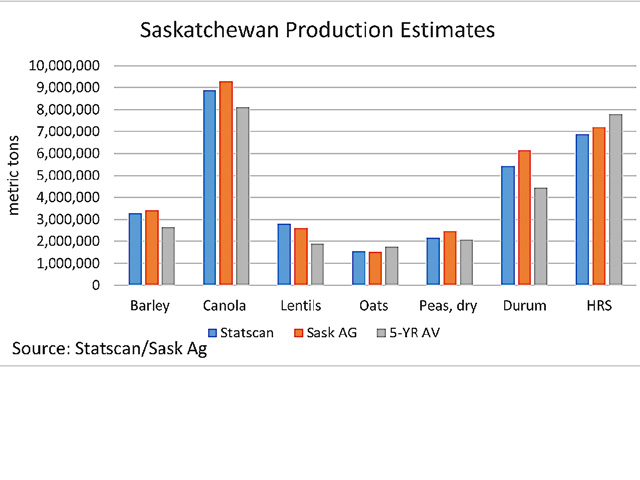