The market liked the announcement today that the Sept. 1 deadline for Canadian exporters to meet China's new 1% tolerance for foreign material has been extended for the second time while negotiations on the matter continue. The November canola contract finished $5.20 per metric ton higher at $458.20/mt, a five-day high, while printing a bullish outside day trading bar on the daily chart, after trading both lower, then higher than the previous day's trading range. Today's finish, however, was well-below the $468.50/mt high reached this session, with potential harvest pressure limiting the move.

Today's move came despite a move lower in both soybeans and soybean oil as well as crude oil, while the weaker Canadian dollar trade, dragged lower with crude oil, was supportive. Futures spreads narrowed sharply, with the nearby Nov/Jan spread ending $1.10/mt narrower to minus $6.20/mt (January trading over the November), while chart resistance rests at the August high on the spread chart at minus $4.90/mt.

The industry seems divided on the threat of a move to 1% foreign material, with reports last week that three smaller shippers have made small sales to China at the lower foreign material tolerance. As well, a well-known Saskatchewan analyst is in the media suggesting that the industry can easily reach the new specs. Meanwhile, concerns are expressed that cleaning to the lower tolerance would be slow and costly, which would ultimately be passed along to the grower.

The Globe and Mail's Tuesday piece titled What's really behind China's decision to restrict canola: science or politics?, by Ann Hui, suggested the science behind the spread of blackleg in canola was settled with the Chinese six years ago.

"They were able to demonstrate that seeds from even the most blackleg-infected areas carried only a .2% chance of carrying the infection. Making it even more of a long shot is that canola seed is shipped directly to crushing plants in China and not to farmers' fields." Previous restrictions placed on canola Canada's canola exports to China were relaxed in 2012.

University of Saskatchewan assistant professor of agricultural and resource economics Stuart Smyth stated "I think it's a bit of a bluff by China to say 'look, we can just go somewhere else.' If they could do that, they would probably already be doing that." China obtains approximately 87% of its canola from Canada.

Then there's the politics. China's demands of Canada seem endless. It wants increased opportunity to purchase Canadian companies by China's state-owned enterprises. It want pipelines built in Canada to improve access and returns on its oilsands investments as well as to enable the purchase of LNG off Canada's shores to meet future energy needs. Other issues include that of labor and the environment. The two countries announced today that they would embark on a feasibility study of a potential free-trade deal.

Given canola's fundamentals which remain tighter than soybeans, the November canola contract traded at a premium to November soybeans on Wednesday for the first time in almost three months, measured in Canadian dollars/metric ton. The spread has recovered from a $55.87/mt discount (soybeans over canola) on July 4, while ending near a close of a $4/mt premium to soybeans today, as seen in the circled red line on the lower study.

Both the canola market and soybean market tend to face a period of seasonal weakness over the month of September.

This week's poll asks what stands out to you the most in the recent Statscan production estimates. You can weigh in on this week's poll which is found at the lower-right side of your DTN Home Page. 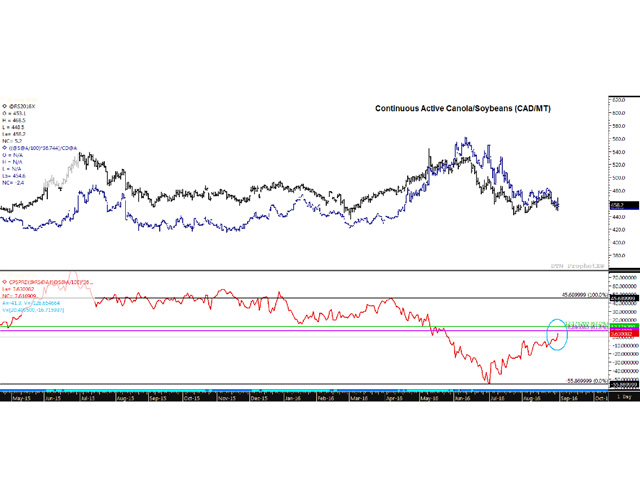