A recent article in the Globe and Mail, "The bull case for the loonie is getting a lot harder", describes the challenges faced by Canada's currency. Weak trade numbers, weak employment data and concerns of yet another interest rate cut by the Bank of Canada continue to weigh on the Canadian dollar. "It's awfully tough to be bullish on the currency looking out through the remainder of this year," stated Doug Porter, chief economist at BMO Nesbitt Burns.

According to the article, "it may take a resurgence in the price of oil to prevent a material pullback in the value of the currency." This is exactly what happened on Thursday. Electronic trade in the September NYMEX crude oil future is shown up $1.65/barrel to $43.37/barrel, after reaching a 13-day high and printing a bullish outside-day trading bar this session and testing the 33% retracement of the move from the contract's June high to August low. Today's move came despite a higher U.S. dollar trade, with crude traders overcoming concerns of abundant global supplies and the International Energy Agency's trimming of 2017 global demand while pinning hopes on a September meeting and the possibility that OPEC will agree to limit production.

The Canadian dollar also posted bullish technical signals in Thursday's trade. Rising close to a half of a cent, the loonie reached a 17-day high. Today's move resulted in a move above the contract's 50-day moving average, while also breaking out from a falling wedge pattern, indicated by the two converging blue lines on the attached chart. While this is viewed as a bullish pattern, an extremely bullish move would normally be seen on a day of high volume which was not the case today.

This week's poll asks what you think of the wheat class modernization changes which took place Aug. 1 for the upcoming crop year. You can weigh in with your thoughts on this week's poll, found at the lower right side of your DTN Home Page.

Previous Post (Canola Trade with China Under Negotiation)
Next Post (Russia Moves to No. 1 in Wheat Exports) 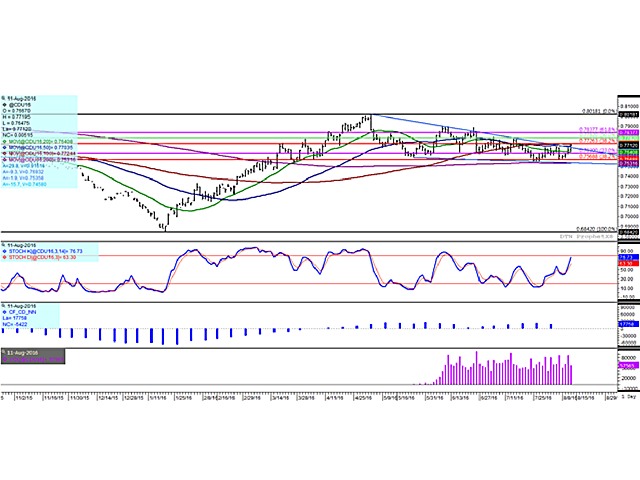