The Sept. 1 deadline imposed by China for Canadian exporters is the elephant in the room in the Canadian grain trade. The imposed changes, which would see the foreign material allowance lowered to 1% from the current 2.5% as a means of controlling the spread of blackleg, was first slated for April 1 but later delayed until Sept. 1. This has been viewed as a "scientific disagreement" over the risks involved, while has brought trade beyond Sept. 1 to a standstill.

The trade has pointed to China's high level of internal stocks as the rationale for this move. The USDA reports cumulative sales of state-owned canola/rapeseed oil estimated at 2.28 million metric tons as of June 1, while reporting that this volume "are expected to absorb part of the rapeseed product market share for the rest of 2016." It is estimated that China's state-owned rapeseed oil reserves were 4.1 mmt as of June 1, a number that the USDA has obtained from China National Grain and Oils Information Center.

Despite concerns over exports to China, canola's futures spreads point to a neutral commercial sentiment while the November future has rallied $22.40/mt from its July 25 low to a 13-day high on Wednesday. Tight global fundamentals for rapeseed along with concerns focused on the heavy rains hitting the Prairies continue to support prices. Nearby resistance remains at $4771.80/mt, the 33% retracement of the move from the June high to the July low.

This week's poll asks what you think of the wheat class modernization changes which took place on Aug. 1 for the upcoming crop year. You can weigh in with your thoughts on this week's poll, found at the lower right side of your DTN Home Page. 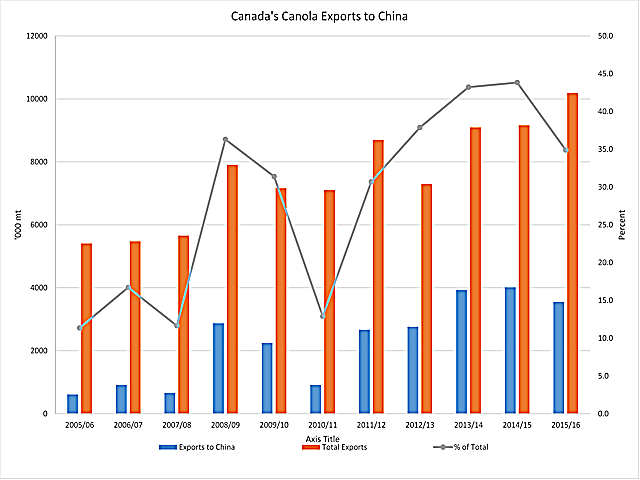