Agriculture and Agri-Food Canada maps show increasingly dry conditions gripping most of Ontario's crop-growing area. As seen on the attached chart, eastern areas are viewed as record dry, as shaded in red on the government maps. The best conditions are shaded bright yellow and represent an accumulation of precipitation from April 1 through July 4 which is rated as Low, or in the 20th to 40th percentile of historical accumulation.

According to Agriculture and Agri-Food Canada, the driest areas of the province include an area which circles Toronto, Oshawa, Peterborough and Orillia as well as a circle around Ottawa, with both areas rated as a severe or D2 drought. This is described as an event happening every 20 years. The balance of the province is classed either as a D1 moderate drought, or a one in 10-year event, or abnormally dry.

AAFC agroclimate specialist Trevor Hadwen told the National Post that the severe drought doesn't necessarily mean catastrophe for the impacted growers, but the clock is ticking. "We're certainly hearing impacts around wilting occurring in some fields. We're seeing some concern around the fact that if we don't receive rain within the next week, we're looking at very stunted crops- crops that will not fill or live up to potential in terms of grain or corn capacity."

DTN's Contributing Analyst Elaine Kub wrote on this subject today, quoting Dr. Bob Nielsen at Purdue University with respect to dry weather and its impact on corn yields. "Beginning about two weeks before silk emergence, corn enters the period of grain yield determination most sensitive to drought stress. Nearly continual wilting of the plant due to drought stress at this stage can decrease yield 3% to 4% per day. During the silking and pollen shed period, severe stress may reduce yield up to 8% per day."

A look back at AAFC's Percent of Average Precipitation maps for Ontario shows a similarly dry year in 2012, where the growing area largely ranged from 40% to 85% of average precipitation as of July 2, similar to the current chart. Headlines from that period include the Toronto Star's "Ontario Corn Crop Withers Under Drought" from July 20, 2012 and the Globe and Mail's "Drought Imperils Eastern Canada Crops" from July 24, 2012. While in no way can one draw conclusions from this, the situation eased gradually through July and August, while corn yields in the province exceeded both the previous year and the five-year average. The same can be said for soybean yields, according to Statistics Canada data.

Environment Canada has posted a Public Weather Alert for southern Ontario today, given heat warnings with temperatures to reach a possible high of 33 Celsius today over much of the area. DTN's Five-Day Highs Compared to Normal chart shows daily highs of zero to 3 degrees C above normal through the weekend. The seven-day National Weather Service precipitation maps shows much of this area receiving roughly an inch of precipitation although much more will be needed.

This week's poll asks what condition rating best describes your crop at this time. You can find this poll on the lower right of your DTN Homepage. We thank you for your support! 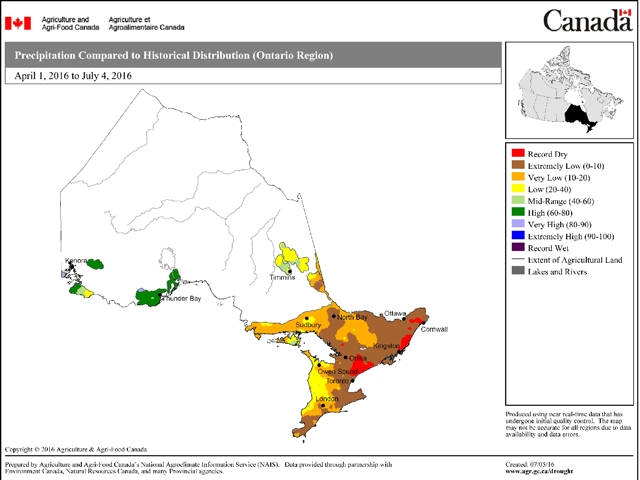