During the first few months of the pandemic, plant-based products that mimic the taste of meat were all the rage. Burgers and sausages from Impossible Foods and Beyond Meat appeared increasingly on supermarket meat shelves and fast-food restaurant menus. By one count, sales of plant-based meat jumped 45% in 2020 from 2019, to $1.4 billion. (https://gfi.org/…)

Then things cooled down. Sales of market leader Beyond rose only 14.2% in 2021; fourth-quarter sales were down 1.2%. (https://investors.beyondmeat.com/…) Privately held Impossible doesn't disclose sales, but Canada's Maple Leaf Foods reported a 3.7% fourth-quarter sales decline and a 52-week increase of only 8.1% for its plant-based meat division. Maple Leaf said it now expects "steady but not spectacular growth in this category." (https://www.mapleleaffoods.com/…)

The stock market has taken notice. Three years ago, Beyond's stock was so hot that its market capitalization exceeded that of a much larger but quite conventional meat-making competitor, Pilgrim's Pride. As I wrote then, that didn't seem likely to last. (https://www.dtnpf.com/…)

It didn't. Today Pilgrim's Pride's market cap is much higher.

Why the slowdown? Is it a temporary thing, a fluctuation in a growth trend that's poised to resume? Or might the sector have plateaued? Either way, what does it mean for livestock producers and feed-grain growers?

Unlike the veggie burgers that have been around for years, the products of companies like Beyond and Impossible are aimed at meat eaters. The vegan founders of these firms believe that if their products taste like real meat, if they bleed on the grill like meat and have the same "mouth feel," carnivores who care about the environment will choose them.

The environmental argument for these products goes beyond the impact on the atmosphere of cows' methane emissions. Consider conversion rates.

The environment is the best argument these products have. Compared with real meat, they are roughly the same nutritionally. They may taste the same -- many who've tried them think so -- but they cost more. Meat eaters who switch to them likely care deeply about the environment, deeply enough to pay more for a product that at best tastes the same and is not nutritionally superior.

One theory, then, is that the market is approaching saturation, with nearly everyone who fits the description of the ideal customer having already converted to these products. That isn't the most likely explanation for the slowdown. These products are probably too new to have reached saturation. But it is a possibility.

Another possibility is that many of those who have tried these plant-based meats just don't like them. As a carnivore who has tried a few, I find them close to the real thing. But I can see how other meat eaters could decide they're not close enough. One of the dangers of the strategy of aiming the product at meat eaters is that it underestimates how much many people really like meat.

Inflation is another possible explanation. Rising prices of many necessities are stretching wallets, which could tempt some plant-based fans back to lower-priced real-meat options.

Whatever the explanation, the slowdown comes at a bad time for plant-based companies. For a new competitor, cultured meat, is preparing to move from laboratory to market. Some analysts think it could start being served in restaurants as soon as next year.

To produce cultured meat, scientists take cells from actual animals and cultivate them in bioreactors. It is, then, arguably "real" meat.

Yet it too can make an environmental argument. Kearney says producing a kilogram of this cell-based meat takes 1.5 kilograms of soy, peas, corn and red sugar beets, just a bit more than the 1.3 kilograms of arable plants for plant-based meat.

Kearney thinks sales of cultured meat will grow much faster than plant-based sales. In a study last year Kearney predicted that in 2040, 25% of global meat consumption will be plant-based products and 35% cultured meat. (https://www.kearney.com/…)

Three years ago, a think tank called RethinkX predicted that "by 2030, the U.S. dairy and cattle industry will have collapsed." (https://www.foodnavigator-usa.com/…)

At the time that seemed ridiculous to a lot of people, including me. It still does. But if plant-based and cultured substitutes live up to Kearney's 2040 forecasts -- a big IF -- they will command an astonishing 60% of the total world market for meat.

Conventional meat, Kearney predicts, will have only 40% market share in 2040; its sales will be 3% smaller than today even though total meat consumption will have been rising 3% a year. That's not exactly a "collapse," but there's no question it would be painful for conventional producers.

If they want to prove Kearney wrong, they need to start convincing the public that conventional meat isn't the environmental disaster that so many people think it is. 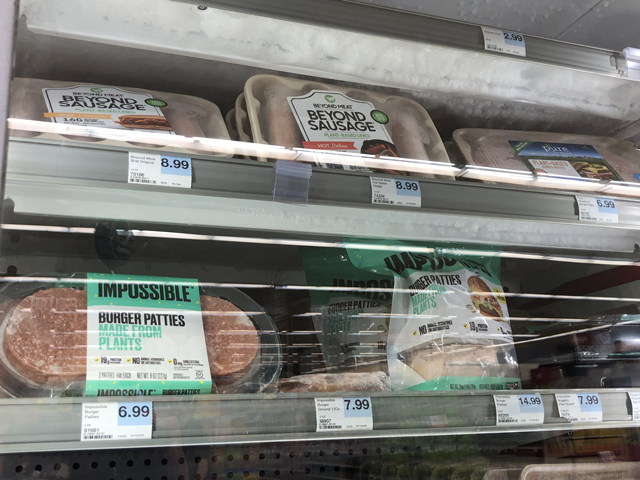