In the days before Donald Trump, when Republicans stood for laissez faire economics and small government, "industrial policy" -- specifically, whether the United States should have an industrial policy -- was a controversial question.

As the incumbent president, Trump has already enacted his policy, which is centered on tariffs. (Trump has also pushed tax cuts and deregulation, but that's economic policy more than industrial policy.) Biden's plan would have the government spend $400 billion on a "buy American" campaign and $300 billion on research and development and "breakthrough technologies." (https://joebiden.com/…)

Both approaches are open to question. Trump's tariffs have failed to launch an American manufacturing renaissance. A recent study by Federal Reserve economists indicates the protection tariffs provide some manufacturers has been more than offset by rising costs of imported inputs for others and by retaliatory tariffs. Trump's tariffs have increased neither output nor employment in manufacturing. (https://www.federalreserve.gov/…)

As for Biden's plan, there's no guarantee a buy-American campaign, even a big one, would induce manufacturers to invest in additional American plant capacity. They'd love the sales in the short run but wonder how long the largesse would last. Would the next president continue the campaign? The next Congress? Companies don't make big long-term investments until they're confident of long-term demand.

But let's not be negative. I write today to look back in history at a U.S. industrial policy that succeeded and may offer lessons for today. It was a policy that benefited farmers and ranchers especially but also the nation as a whole.

If I tell you the year was 1862 and the president was Abraham Lincoln, many of you will know where I'm going with this. In 1862, Congress passed and Lincoln signed four measures that laid the groundwork for the success of one industry in particular -- agriculture -- and hastened the development of the American West. (https://www.nal.usda.gov/…) Specifically, the measures:

-- Provided 160 acres of public land to citizens and prospective citizens who homesteaded and improved the land.

-- Donated public land to the states for the establishment of colleges of agriculture and the mechanical arts.

-- Granted western land and government funds for the construction of a railroad linking the Atlantic and Pacific coasts, the Union Pacific.

Talk about an industrial policy that worked. Over time, more land was dedicated to agriculture and the ranks of farmers and ranchers grew. Ag land came to be worked by more knowledgeable, better educated producers, which boosted productivity. American agriculture was able to feed a rapidly growing population and export its products as well.

Another industry that benefited from the policy, railroads, grew hand-in-hand with agriculture. Together the Homestead Act, along with the Union Pacific measure and subsequent laws subsidizing trans-continental railroads, encouraged the development of the west, to the benefit of agriculture and the national economy.

There are lessons in this success story for contemporary industrial policy. Notice, for example, that in creating the USDA and helping build land-grant colleges the government contributed to the education of farmers and the dissemination of agricultural knowledge. This laid the foundation for a more prosperous agricultural industry.

Notice, too, that the three agriculture-focused measure were all aimed at expanding the opportunities available to large numbers of citizens. That cannot be said of some industrial policies.

One of the most potent arguments against industrial policy is its tendency towards cronyism -- big subsidies to small numbers of well-connected fat cats. The 19th century railroad industrial policy, however necessary, was vulnerable to that criticism.

Lincoln's industrial policy in support of agriculture wasn't. His aim was to provide large numbers of people the opportunity to advance in life by becoming owners of property and businesses.

As Robert Hormats put it, Lincoln "flatly rejected the popular notion that society needed a permanent class of low-wage workers to provide the foundation for economic progress -- an idea that in its most extreme form was the rationale for slavery." As Lincoln saw it people might start off as low-wage workers, but they would save money and eventually buy their own tools and go to work for themselves. "To Lincoln, the promise of upward mobility was key both to the nation's economic growth and to its social stability." (https://hbr.org/…)

Applying Lincoln's lessons today, industrial policy should focus on knowledge and education and aim to help large numbers of people move into higher-wage jobs. One specific way to do that: Government can finance programs enabling more Americans to get apprenticeships or associate degrees that will prepare them for those jobs.

If manufacturing is to expand in the U.S., it will likely be highly automated manufacturing requiring fewer workers but more highly educated (and better-paid) ones. Manufacturers say they're being held back from new investments of this sort by a big shortage of skilled workers. A Lincoln-inspired industrial policy could address that.

This is one of those things, like rural broadband, that everyone in Washington (including both presidential candidates) favors yet it never seems to get done, or at least get done at sufficient scale to make a difference. Since both candidates agree that we need an industrial policy, now is the time to adopt an industrial policy that Abraham Lincoln would applaud. 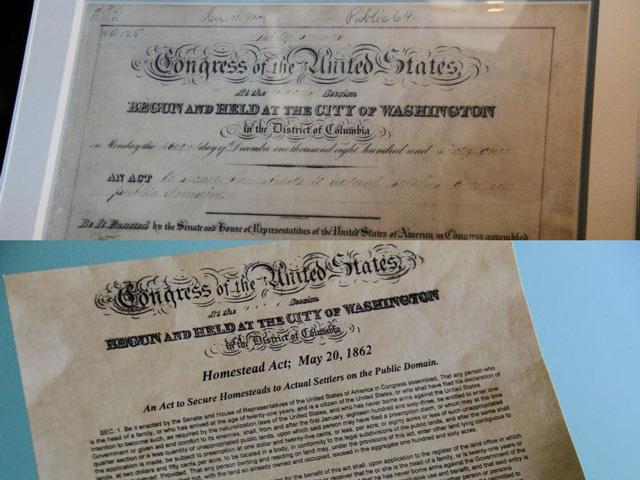