Our winter friend, the polar vortex, has been absent for about a month. A wave of cold swept through during the Christmas holiday, but it has been very warm for most of the country since then.

But we are in the heart of winter and surviving this long without another visit from arctic cold conditions during a La Nina-controlled weather pattern is a rather unique feat. So, it should be no surprise when looking at your upcoming forecast to see low temperatures staring you in the face.

That, of course, is exactly what you should see if you live in the Canadian Prairies, Northern and Central Plains, and Upper Midwest. These areas will have the longest duration of low temperatures from the upcoming event that is forecast to last about two weeks, or into mid-February.

Other parts of the country will see varying temperatures with the West, Southern Plains, rest of the Midwest, and Northeast more likely to see cold than warm, and the Southeast to see more warm than cold during the same time frame.

Temperatures in the northwestern Corn Belt and Canadian Prairies will be 10 to 20 degrees Fahrenheit below normal on average during that two-week period while some bursts of arctic air will make those even colder. Warmth in the Southeast will resist the deeper penetration of the arctic air.

At times though, the warmth will not be able to resist it, and a burst of cold air will move through. These are likely to be shorter bursts, however, and probably not as significantly cold as what is sure to happen to the northwest.

The setup of very low temperatures in the northwest and warm conditions in the southeast will fuel an active storm period. The initial front itself will be setup by a clipper system moving through southern Canada Jan. 26-28.

That front will be continually pushed southward by a couple of storm systems forming along that front, with the colder air reaching down to Texas and the Ohio River by Jan. 29. Another push should bring that cold air deeper early to middle of next week, but the far Southeast, near the Gulf and Atlantic Coasts, are likely to be spared the colder temperatures until late next week.

These systems that bring the cold deeper will also produce widespread precipitation. It may be difficult to get snow into the south, with the precipitation shutting down before the cold air moves through, but amounts should generally be well-above normal for areas near the Gulf Coast and Southeast. Some other areas of the Midwest and Northeast should also do well with the precipitation. The southwestern Plains though is least likely to see decent precipitation, even though the storm track will be right through the region.

Additional bursts of cold coming down from Canada will make for more storm systems and reinforcing shots of cold air. These bursts may be short-lived for the Southern Plains and Southeast, and heat could return in between the waves of cold. The yo-yoing temperatures will likely be a common theme in the forecast moving forward.

However, if you look at it from day-to-day, you may see some significant differences. Models move these bursts of cold through at different times and are not consistent. To compensate, many forecasts blend out some of the extremes. So, if you look at a 14-day forecast, the temperatures you see at the end of the range will likely need some adjustment, and likely downward on a couple of those days, perhaps significantly.

The incoming cold will send energy demand up, and how often that reaches the more populated areas of the country in the east and south will determine how much demand increases. Natural gas prices have taken a dive recently due to a very warm January. But they are likely to go up. Diesel prices have been rising this month. Feed demand for livestock should also increase in the week ahead, which could threaten short supplies after cold bursts in November and December.

And other hazards due to extreme cold like frozen pipes and winterkill for winter grains will need to be watched again. The cold may not be as severe over the south and southeastern areas of the country for this to be an overly large concern. But for those in the margins like the Central Plains and eastern Midwest where protections are not as great for infrastructure, and protective snow cover is not as widespread, there will be more at risk.

The question now is when does the cold recede? Models disagree on timing, but a building ridge of high pressure in the Southeast may be able to push back the cold more to the western portions of the U.S. and Canada to bring some relief around mid-February.

Some model solutions suggest the onslaught could continue through most of the month, with any breaks in the arctic cold likely being short while others make the Southeastern ridge much more potent. Those same models break that Southeastern ridge down toward the end of the month. So, buckle up, the reign of winter is back upon us and will have some staying power. 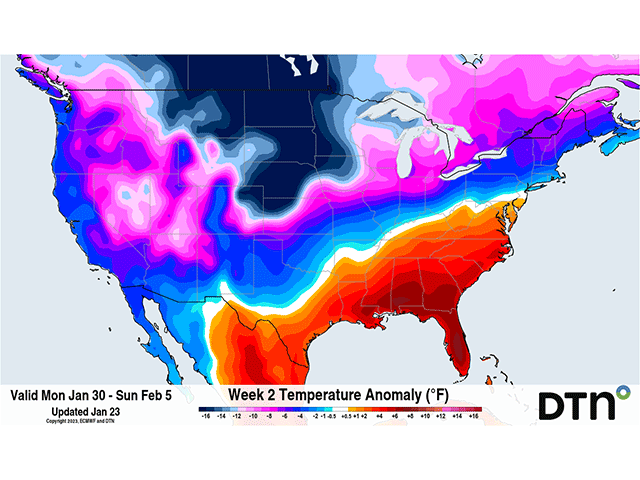