JEFFERSON CITY, Mo. (DTN) -- A fresh blanket of snow was a welcome sight across much of the nation's winter wheat production area this past weekend. Wide swaths of western Kansas and eastern Colorado received 6 to 12 inches of snow, and while it offered only scant moisture to the parched Plains, it now provides some cover for a winter wheat crop that in many areas was already struggling as it entered dormancy.

"Going into winter, we had a really wide range of wheat conditions, so I think we're going to see a wide range of conditions when we hit green up this spring," said Lucas Haag, an extension agronomist and associate professor at Kansas State University. "In some areas, we had decent stands where the crop got established timely and had time to winterize its crowns. In other areas, establishment was late; some wheat never germinated. Of course, all of it was in need of moisture."

According to the U.S. Drought Monitor maps released on Jan. 19, more than 57% of both Kansas and Oklahoma are currently experiencing extreme to exceptional drought. Conditions are only nominally better in regions of Texas, Nebraska, South Dakota and Montana where hard red winter wheat is grown.

Haag noted that some wheat that was established early used up what soil moisture existed. Dry soils and no snow cover can be a lethal combination for winter wheat, he added.

"That water in moist soil buffers the soil temperature, so a dry soil will have much wider swings in temperature than a wet soil," he explained. "Our worst winterkill risk is certainly when we have no snow and really dry surface conditions."

The arctic blast that swept across the country in the days before Christmas prompted some winterkill concerns, but Haag said that with the wheat crop in the thick of dormancy, stands that succumbed during that weather event were more likely a victim of drought and late development.

"Winterkill is really just the straw that broke the camel's back," he added.

DTN Ag Meteorologist John Baranick said snow cover in the Plains will be important as another blast of cold air is expected to move south through the region next week behind a strong cold front.

"While not currently forecast to be as cold as the arctic blast that came through in December, temperatures could fall below zero in a lot of the wheat areas," Baranick said. "The snow cover could protect those areas that see the cold, and any areas without could see additional winterkill. The region will likely be in and out of colder temperatures through February, and the DTN forecast suggests that threats will continue for deep cold through April."

As January gives way to February, Haag said any unseasonal stretches of warmer weather lasting 10 to 14 days would cause him the most concern. Such weather would cause some winter wheat varieties to begin breaking dormancy.

"These plants are already stressed, and they just don't have the reserves to go through multiple rounds of yo-yoing temperatures," he said. "When we hit spring green up and get a better feel for what our situation is, it's going to be pretty hard to dissect what was winterkill and what was drought stress. There'll be some wheat that just flat ran out of moisture and died."

He advised that wheat growers remind themselves of wheat's resiliency and do their best to remain patient when it comes to assessing the condition of stands too soon.

"We talk about wheat having nine lives," Haag said. "It takes a lot to kill it, and we've raised decent crops off some really lousy looking stands before.

"I'm pretty hesitant to call wheat dead until I have brown, mushy plant material in my hands," he said.

A Kansas State guide to winterkill and spring freeze injury can be found here: https://bookstore.ksre.ksu.edu/… 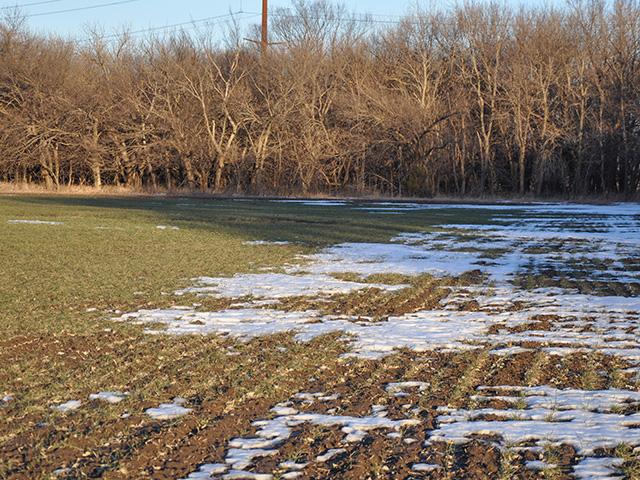