An upper-level ridge that has been bringing mostly above-normal and sometimes near-record temperatures east of the Rockies is about to move out of the country to be replaced by a trough. For parts of the North-Central U.S., the next few days will feature all four seasons. If folks have the opportunity to get out and finish harvest or fieldwork, now seems to be the time to do it.

There is a deep trough in the western U.S. and it's going to send pieces of energy through the country in waves. The first is producing some stronger winds in the Northern Plains and Canadian Prairies along with a bit of snow. The snow has been heavier in Canada. The storm is leaving behind a front across the Northern Plains and Upper Midwest on Tuesday and Wednesday where scattered showers will develop, mostly as rain. Rain could be heavy in spots and help with the ongoing drought.

But as the heart of the trough moves eastward into the Plains on Wednesday night, the weather will change dramatically. A strong storm system will wrap up and head from northeast Colorado through Minnesota and Lake Superior. Precipitation along and north of the leftover front will increase substantially. Cold air that is being locked in Canada and Montana early this week will be sucked into the system and turn any rain over to snow. During the transition, there could be a band of freezing rain that develops from South Dakota into northern Minnesota. Heavy snow will continue over the Northern Plains and Upper Midwest into early Friday. Snowfall could eclipse 12 inches across the Dakotas and northern Minnesota, but that may be hard to accurately measure. Winds with the system will be very strong and likely in the 40 to 50 mph range, which will cause blizzard conditions where the heavy snow occurs.

The cold front is incredibly strong and could produce severe storms for the eastern Plains and western Midwest on Thursday. The most likely location at this time is across Iowa and northern Missouri, though that may change depending on the speed of the front. Damaging wind gusts are the primary threat, but some embedded tornadoes and hail will also be possible. As the front continues eastward, however, showers will be much more isolated and weaker.

Complicating the situation will be Tropical Storm Nicole, which is currently east of the Bahamas on Tuesday morning and headed west. It is strengthening and likely to be a hurricane as it heads into Florida on Thursday morning. The system is forecast to move through the Southeast and Mid-Atlantic on Friday and through the Northeast U.S. on Saturday ahead of the front that will sweep eastward. Heavy rain is likely along with some locally breezy winds. Heavier rain could fall west of the Appalachians into the Tennessee and eastern Ohio river valleys, which would at least temporarily help with river levels on the Mississippi River but delay the remaining harvest.

Behind the front, arctic cold air will be spreading through the country and last through most, if not all, of next week. Temperatures will be cold by mid-January standards and in some places could challenge record lows. Low temperatures will fall below zero Fahrenheit across the Northern Plains, especially where snow cover is the heaviest, and lows in the 10s could make it down into the Southern Plains and Tennessee Valley at some point next week. Wheat in the Plains may go dormant and give up until spring. But with some areas still left to plant and emerge, it becomes a much more concerning situation when coupled with the ongoing drought for the 2023 wheat crop.

The pattern flip will be fairly stable as a trough builds up over Hudson Bay and a ridge is maintained over Alaska and northwest Canada, likely through the end of November. This will keep a clipper pattern active across the northern tier of the country supplied with plenty of arctic air. Several disturbances will move through the flow to pump colder air through the country all next week.

There will be some moderation across the south for the following week, however. The subtropical jet stream, which will supply chances for some precipitation across southern areas next week, will weaken for the week of Thanksgiving and allow some warmer temperatures to fill back into the southern half of the country. This is a typical pattern we see during La Nina winters, and it is coming early for the U.S. in late November. The DTN forecast foresees this potential lasting through December as well, giving the eastern half of the country a chance for its first widespread cold December since 2013. You can read more about the winter weather outlook from DTN here: https://www.dtnpf.com/… 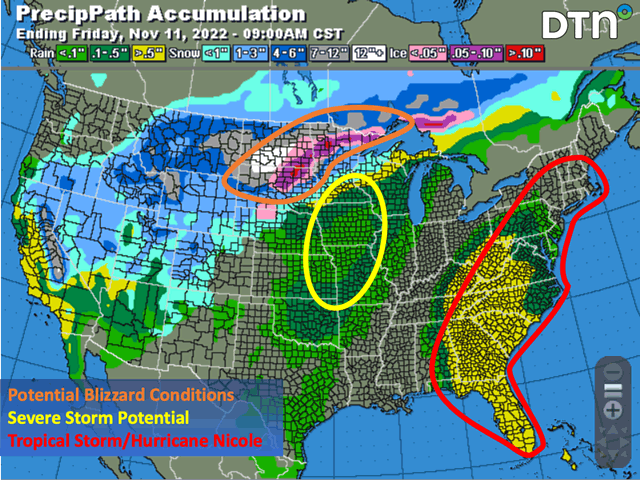