As harvest continues to kick into gear this fall, a stretch of warm-to-hot weather and limited showers are helping to dry out this year's corn and soybeans.

Many folks are ready to put this season behind them as heat and an overall lack of showers have set yield estimates below trend line across the U.S. and severely hurt areas in the western and southern Corn Belt.

A hot and dry pattern continuing into the last days of September is bringing about good harvest conditions. Temperatures this week are soaring into the 90s for much of the country east of the Rockies and several areas from southern Nebraska to northern Texas have already registered 100 degrees Fahrenheit on their thermometers so far. That heat is expanding underneath a strong ridge anchored over Texas to include more of the Midwest, Delta, and Southeast on Sept. 20-21.

But it is the fall season and drastic changes in weather should become more of a regular occurrence going forward. A trough of low pressure in the Canadian Prairies is pushing east this week, dragging a cold front deep into the country. It may not make it to the Gulf Coast, but temperatures behind the front will drop 20-30 degrees F from the heat ahead of it.

Such a stark change in temperatures usually coincides with strong thunderstorms or at least widespread showers and thunderstorms. But neither look promising with this system. With most of the energy to organize storms remaining in Canada, thunderstorms are generally going to be weak. The Great Lakes will see some better chances for organized severe storms, but widespread severe storms are most likely right off the shores of Lake Erie and Ontario Wednesday night, mostly out of the country's prime growing regions. The western end of the front will not have much of the organizing winds above the surface, so severe storms are unlikely.

Instead, there could be a couple bands of some more moderate to heavy showers along the Nebraska-Kansas border Wednesday and Thursday. Other than that, the relief from the heat is the most significant feature. With the ridge opposing the advancing front, areas from Texas through Georgia are likely to remain well-above normal going into this weekend.

Another system will do its best to tamp down that ridge across the South-Central U.S. later this week and weekend. Now spinning off the California coast Sept. 20, the storm system will slowly move through the western states through Sept. 22. It will emerge into the Plains then on Thursday night and Friday morning, moving across the Corn Belt with scattered showers through the weekend.

The cold front to this system will have enough strength to move to the Gulf Coast and these southern areas will finally see a break from the heat. Showers will also be possible, though they are unlikely to be of any consequence until they get to the Mississippi River and head through the Southeast.

Farther north, showers will be more scattered and likely for the Northern and Central Plains Sept. 22-23 with a brief break before they pop back up for the Midwest during the weekend. Showers may be locally heavy in a few spots, but most areas are going to see light to perhaps moderate showers. Many areas are going to get missed as well.

With showers being very limited, harvest conditions continue to be pretty good. And a ridge of high pressure building back into the western states this weekend will spread across the country for the last week of the month, causing temperatures to rise above normal once again.

While the weather is mostly good for harvest, it is rather poor for winter wheat planting and establishment. The obvious spot and focal point is currently the southwestern Plains. Mired in drought going back to last fall, this area already had a poor hard-red winter wheat crop this season. Heat and drought continue to cause poor conditions for the new crop being planted. Without much precipitation in the forecast any time soon, those poor conditions are going to continue.

But it is the northern Delta into the eastern Midwest that we should also be concerned about for the soft-red winter wheat crop. There are many areas in this part of the country that have been dealing with dryness through the summer as well and soil moisture is mostly poor in the Delta while it is mixed in the Midwest. The showers that move through over the next week will not provide much of a boost to too many areas and the heat that comes this week and next should sap more of that moisture out of soils. Establishment of this crop will need some help as well.

Previous Post (Central Plains Were Record-Dry in August... With Some Thanks Going to La Nina)
Next Post (Minimal Soil Moisture Recharge Expected This Fall ) 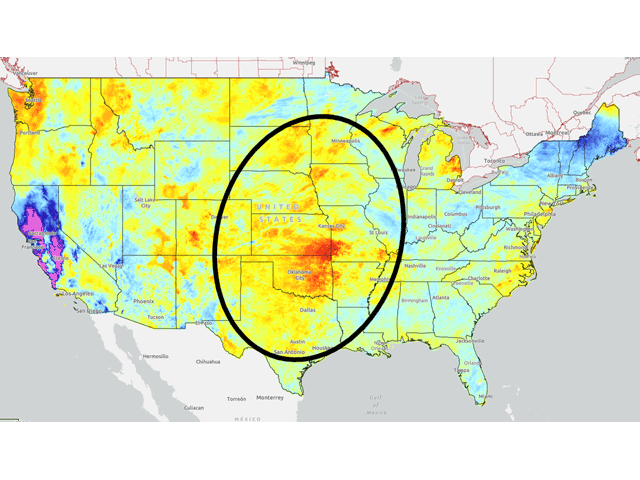