Catching up on some headline weather and climate extreme areas of the United States and globally during the past year or so, and we see a warm, dry and blazing beginning to 2022.

First: In the far northern latitudes, much of Siberia continues to be in a very warm environment. The Copernicus Climate Change Service, operated by the European Centre for Medium-Range Weather Forecasts (ECMWF), reported that observed temperatures in large parts of Siberia in January were more than 6 degrees Celsius (10.8 degrees Fahrenheit) above average. This continues a trend of sharp warming in the high latitudes, which is causing the far northern permafrost to thaw and release large amounts of greenhouse gases. Reporter Joshua Yaffa, in a Jan. 17, 2022 New Yorker article, wrote that "Scientific models suggest that the permafrost contains one and a half trillion tons of carbon, twice as much as is currently held in Earth's atmosphere."

Second: It appears that the current La Nina in the Pacific Ocean is offering only minimal precipitation benefit to the very dry northern and northwestern U.S. grain areas. Heat and drought resulted in 2021 wheat production declines of 48% in Washington; 32% in Oregon and in Idaho; 56% in Montana; and 37% in both North Dakota and South Dakota (calculations based on all-wheat production in the USDA Jan. 12, 2022 Annual Report). These states are favored for better chances at above-normal precipitation during La Nina winters. However, that moisture has been fickle. For example, Spokane Washington has received 7.31 inches precipitation since Oct. 1, 2021. That amount is only 0.84 inches above average and does not indicate a notable La Nina-related benefit. Meanwhile, the entire western U.S. continues to labor under severe to extreme drought conditions ahead of winter wheat breaking dormancy. Regarding heat -- again using Spokane, Washington as an example -- 2021 records detailed 42 days with a daily high temperature of at or above 90 F. That is twice the normal 21 days with 90 F or higher.

Third: The decade of the 2020s has been a decade of fire in many world regions, including Australia. Fires causing immense destruction in the eastern half of the continent in 2020 and 2021 were prominently noted. Now, in 2022, Western Australia is in the burn path. A cluster of fires in the primary wheat-growing region of Western Australia formed in early February with the characteristics of wildfires in other parts of Australia and in the U.S. during the last few years; very dry conditions, low humidity, high temperatures and strong winds allowed for fast-forming and deadly fires.

Accounts from the countryside include details of burned cropland totaling more than 100,000 acres, livestock deaths and 200-year-old trees succumbing to the blazes. And, in terms of heat -- Perth, Australia reported hottest January on record in 2022; and the town of Onslow in the northern portion of Western Australia had a maximum temperature in January of over 50 C (122 F), which equals the highest temperature in Australia.

Again -- heat, dryness and fires indicate a weather and climate scenario in these spotlight areas that is picking up in 2022 where it left off in 2021. 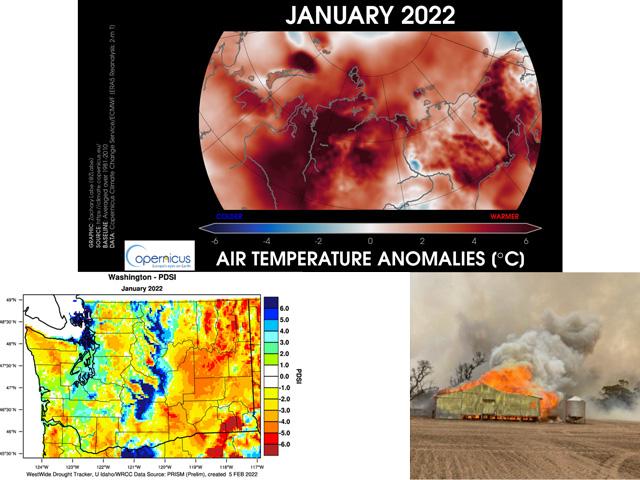