The annual Arctic Report Card, produced by NOAA's National Snow and Ice Data Center, summarizes how 2021 brought yet more influence of climate change to the far northern reaches of the world. And the report summary states specifically that climate change is transforming the Arctic into a "dramatically different state." This part of the world, once a reliably frozen region, is turning green and the ice cover is melting, as increasing heat and the loss of ice "drive its transformation into a warmer, less frozen and more uncertain future" according to the report.

Higher temperatures keep on coming. The report notes that the October-to-December 2020 period was the warmest Arctic autumn on record dating back to 1900. During the year from October 2020-to-September 2021, the average surface air temperature over the Arctic was the seventh warmest on record. The Arctic continues to warm more than twice as fast as the rest of the globe.

Effects of warming influence are most notable in terms of ice melt and river water volume. Sea ice volume in April 2021 was the lowest observed since sea ice data began being tracked in 2010. The Laptev Sea off the coast of northern Siberia had record-low sea ice due to an early thaw. The intensifying water cycle is evident in a long-term increase in the Arctic region's river discharge. And for the first time in recorded history, the summit of Greenland had rain -- not snow -- in August 2021.

The loss of sea ice merits more detail. The Greenland ice sheet has now lost mass almost every year since 1998, with record ice loss in 2012 and 2019 after decades of relative stability.

The total extent of sea ice in September 2021 was the 12th lowest on record. All 15 of the lowest minimum extents have occurred in the last 15 years. The substantial decline in Arctic ice extent since 1979 is one of the most iconic indicators of climate change.

Animal life is changing in the Arctic as well. The Alaska tundra beaver population is now double the total in 2000. The reason? Trees are sprouting in formerly always-frozen turf. There's another notable indication of how things are changing in the region: trash is showing up. An unprecedented amount of foreign trash from fishing vessels washed ashore in the Arctic in 2020 because the boats were able to travel farther north.

The far north climate change impact on weather patterns in major world crop areas is a topic of close scrutiny. A key item of study is how the lack of consistent cold in the high latitudes will influence ocean currents and upper-air jet stream activity. Regarding the jet stream, a highly publicized idea is that far northern warming is contributing to slower and less consistent jet stream flow, resulting in stagnant weather patterns with damaging impact on crops.

A later item will review the year-end assessment of climate change impact in the Antarctic region. 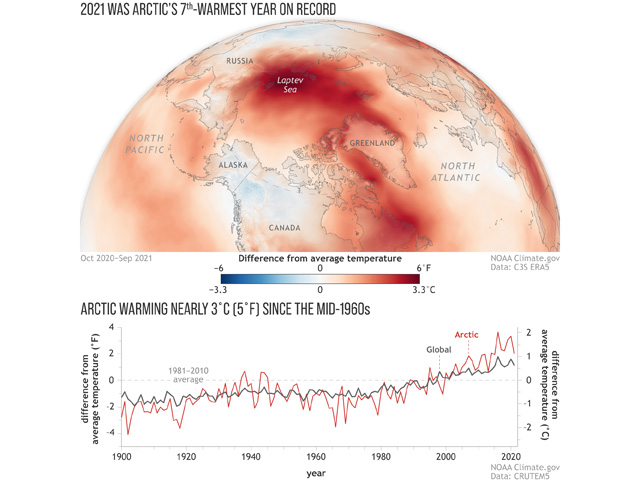