Well, it is finally happening. During La Nina, it is common for the polar vortex, or the winds that circumnavigate the Arctic, to become dislodged and break into pieces. That sends tastes of arctic air southward into the mid-latitudes across the Northern Hemisphere.

But we really have not seen that just yet. Usually this happens when strong ridges of high pressure force their way northward to the North Pole and disrupt the vortex. Until the past few days, we had not seen that yet during the fall or early winter.

But now, on the first official day of astronomical winter on the solstice, it is taking place. Two ridges will actually cause the disruption with this event. There is a strong ridge in the North Pacific that has built up through the Bering Sea. It is not a complete block as little systems will still be able to get from Russia over the top of it and then back down into western Canada, but the one over Greenland will be the bigger concern as it drifts over the North Pole during the next couple of days and connects to another strong ridge over Siberia. These blocks are breaking the polar vortex into pieces that will cause more stagnant patterns across the Northern Hemisphere all the way into the new year.

In North America, the lobe we are most concerned about comes from three features. The first is a trough already over central Canada. For those living north of the border, temperatures have already been rather cold for the last several days, but it has been varying.

The next is a trough off the coast of California. This trough has sent a couple of pieces of energy into the U.S. already and is poised to move itself into the western U.S. by Dec. 23. And that is because the third piece of energy will attract both of these troughs into Western Canada by the end of the week.

This third piece of energy is escaping over the top of the North Pacific ridge and will dive south along the Canadian Rockies. At the same time, a ridge will be developing over the southern U.S. and the three ridges will lock the lobe of the polar vortex over western North America for the remainder of December.

The effect will be drastically cold weather in Western Canada to start. Anomalies are expected to run 30 to 40 degrees Fahrenheit (16.6 to 22.2 degrees Celsius) below normal through most of the Canadian Prairies starting Christmas Day and lasting at least through the end of the year. Some areas will get colder than that.

South of the border, the ridge in the southern U.S. will do its best to keep those temperatures locked up in Canada, but we will see spurts of it leak down into the Plains and Upper Midwest at times.

The polar vortex may not move much next week, but it will still be active. It will send pieces of energy through the northern tier of the U.S. and southern Canada, offering multiple chances for precipitation, mostly in the form of snow, and slowly tamping down the southern ridge.

Models are anticipating that the southern ridge will not be able to hold up past the first of the year and that will allow the vortex to slide farther south and east through the middle of the continent, spreading its low temperatures throughout much of both countries outside of the Southeast U.S. where the ridge may hang on just enough.

There is little question in the models what is about to happen to temperatures across North America. The question more is how long does the extreme cold last? Long-term simulations suggest that the cold will stick around through at least the middle of January, and could potentially hold on over western areas of the continent going into February. I would caution taking models at face-value this far out, they have a tendency to be misleading and incomplete. But they do show us that this event is likely to be a long-duration one and not just a week's worth of misery.

Of course, for those with livestock, polar vortex is a four-letter word and will increase stress for the animals that are outside. For all of us, it will increase fuel usage and likely, prices as well if the cold can make it to the higher-populated areas of the Northeast U.S. and southeast Canada.

It took some time to get going, but La Nina is bringing its first sustained shot of cold air to North America for the winter. I doubt it will be the only such event we will have to endure. 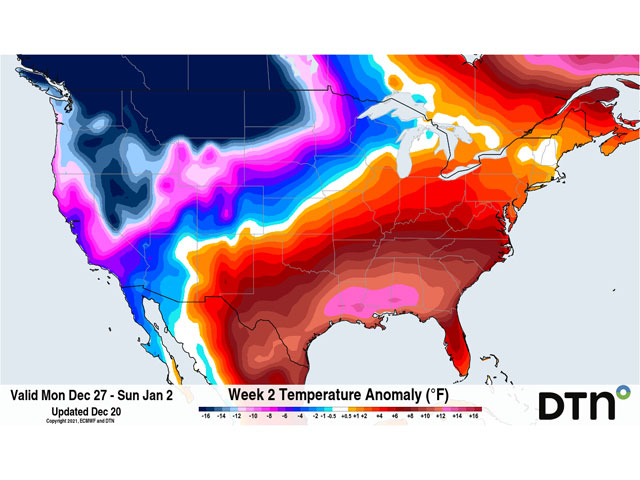