The first full week of July brought a collection of extreme rainfall that created a common bond among three far-flung locales: the Mississippi Delta, Washington, D.C., and south-central Nebraska. The commonality: flooding, either occurring or the threat of it, caused by extreme rain.

The D.C. area put up the first watery mark. On July 8, a cluster of thunderstorms brought torrential rain to the U.S. capital. Nearly 4 inches of rain -- a month's worth -- fell in just one hour on the immediate area surrounding Washington, D.C. In Alexandria, Virginia, neighborhoods and commercial areas flooded as river gauges reported an 11-foot rise in one of its major streams. The rain lasted nearly five hours, triggering the region's first-ever flash-flood emergency declaration from the National Weather Service. Water leaked into the White House basement.

July 9 was south-central Nebraska's turn in the monster-rain spotlight. This area of Nebraska, south of the city of Kearney on the Platte River, is flat, with more than 4,000 square miles of natural lowlands and marshes; part of the affected area is in the Rainwater Basin Wildlife Management Area. The area indeed became a basin, when from 3 to more than 10 inches of rain fell in just a few hours. The area got around one-third of its average annual precipitation in just one day.

Flood warnings were still in effect July 13, for not only river basins such as the Platte, Republican, and Wood, but also for communities that don't even have a creek because of the inundation. The lead item in the University of Nebraska Extension Service Cropwatch weekly bulletin board posting was "Impacts and Options After Mid-Season Flooding", with the subtitle question "How long will the crop survive in standing water and what does this mean for the rest of the growing season?"

And now, we come to Barry -- a tropical storm and, for a short time, a hurricane. Barry started as a tropical low in the Gulf of Mexico July 10, and immediately started hammering the Louisiana coast and New Orleans with heavy rain along with storm surge-related flooding. Rainfall forecasts with Barry were pegged in the range of 15 to 20 inches in the lower Delta through July 17. But, in addition, the storm surge and sweeping of Gulf of Mexico water inland in the Mississippi River channel meant that Barry-related surge added to Mississippi Basin flooding already in place in the region. The latter was a result of the record-breaking rain from last spring farther north in the Midwest and Plains.

Indeed, for U.S. crop country, the major weather event of the 2019 crop year is flooding. The magnitude and area of coverage are mind-boggling. Remember, this past spring, the Mississippi and Missouri Rivers reached or exceeded levels set in 1993 and 2011 respectively that were thought of as once-in-500-years occurrences. The Arkansas River had so much water flowing through the meter at Little Rock that its volume was greater than Niagara Falls. The recovery time from damage to farmland, equipment, storage, roads, livestock herds, and, literally, producer health, will likely be measured in years, not months. And, as everyone knows, corn planting was the slowest on record.

This is not the first season when such extreme precipitation has occurred, but it's the worst that I can recall. And, for an answer as to what's behind so much extreme rain in areas that are so far removed, I direct you to the following details regarding global warming-related climate change, and its resulting impact on extreme precipitation, taken from the Fourth National Climate Assessment, Vol. II: Impacts, Risks, and Adaptation in the United States (2018).

First, regarding warming, the National Climate Assessment summarized "global annual average temperatures for the period since 1986 are likely much higher and appear to have risen at a more rapid rate than for any similar climatological (20-30 year) time period in at least the last 1,700 years." But, within that 33-year period is the fact that new records have been frequent. The National Climate Assessment noted that, regarding global temperatures, "Sixteen of the last 17 years have been the warmest ever recorded by human observations."

And, when it comes to heavy precipitation, the National Climate Assessment had these details: "The frequency and intensity of heavy precipitation events across the United States have increased more than average precipitation ... Observed trends and model projections of increases in heavy precipitation are supported by well-established physical relationships between temperature and humidity. These trends are consistent with what would be expected in a warmer world, as increased evaporation rates lead to higher levels of water vapor in the atmosphere, which in turn lead to more frequent and intense precipitation extremes."

Barry, the Beltway and the Rainwater Basin -- three areas worlds apart in distance, but bound together in the flood history of 2019. We continue to see -- and feel -- the impact of extreme precipitation and the long-term influence of climate change. We'll likely feel the ramifications of this atmospheric framework for a long time. 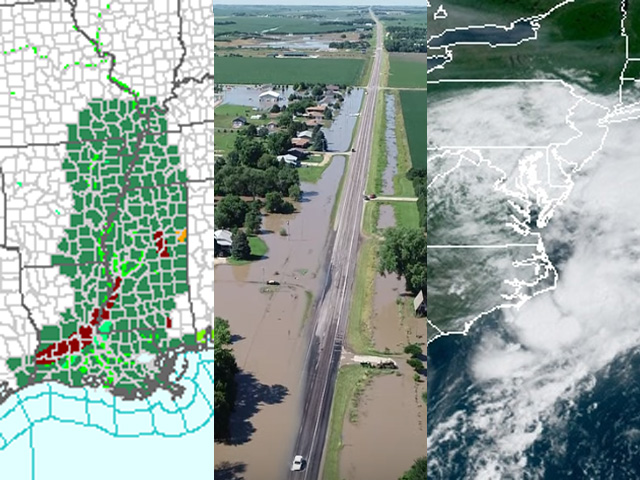