OMAHA (DTN) -- Pacific Ocean El Nino conditions appear to be ending, which may indicate drier times ahead for the Midwest. That was the message in a review of eastern Pacific temperatures by DTN Senior Ag Meteorologist Mike Palmerino.

The Pacific Basin has maintained weak El Nino-level temperatures, with values of between a half-degree Celsius and 1 degree Celsius above average since September 2018. That run may be over, Palmerino said.

"The (eastern Pacific) sea surface temperatures are coming down pretty rapidly right now," Palmerino said on the DTN Ag Weather Week in Review audio program. "We were looking at, back in the month of May, a departure of seven-tenths of a degree (C) above normal. It's now down to three-tenths of a degree (C) above normal. So, clearly, temperatures are dropping there. You could say, potentially, that we are not any longer, really, in any sort of an El Nino scenario."

The timing of this Pacific change is a potent influence on two weather scenes. With El Nino out of the way, subtropical latitude jet stream activity fades -- and, along with that decline, tropical storm activity in the Atlantic Ocean and Gulf of Mexico has an opportunity to increase; this coming at a time when Tropical Storm Barry is on track to bring heavy, flooding rain to the lower Mississippi Delta.

"If you can get out of El Nino, it would likely help to support more tropical activity," said Palmerino.

Farther north, cooling trends in the Pacific Basin have occurred in years when corn yields had notably lower numbers than the previous year. Two prime examples are the years 1988 and 2010, when corn yields were well below the previous crop year's output. Both those example years featured the Pacific transitioning rapidly from El Nino to La Nina. The reason is that Midwest crop weather went downhill.

La Nina is not forecast to develop in the Pacific this growing season. Crops, of course, are already under pressure because of much-delayed planting.

The near-half-degree-Celsius decline in eastern Pacific temperatures is not a guarantee of further sea surface cooling, but it puts observers on point that changes are in the works.

"If these sea surface temperatures do continue to fall significantly over the next month or so ... that could lead to drier-than-normal conditions in the Midwest through the rest of the summer," Palmerino said. 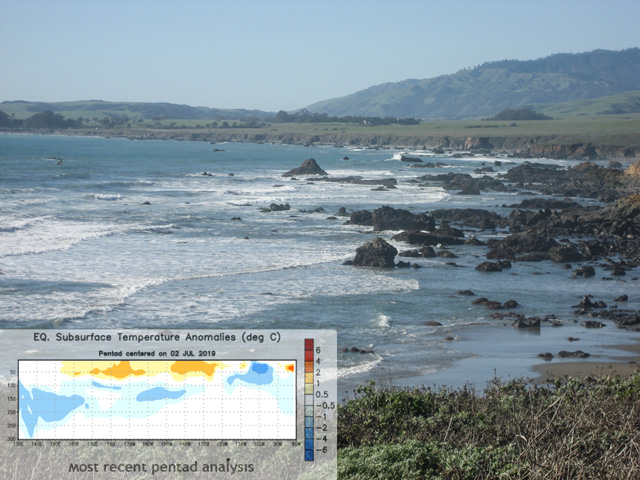