Most crop areas of the Canadian Prairies have had generous rainfall to benefit crops during the past few weeks. The driest sector is the southwest, especially southern Alberta. In this area, rainfall has not kept pace with crop requirements. Elsewhere, southern Manitoba was recently dry; some rain was received during the past week with mixed benefit. Although the rain was localized and spotty with variable amounts, according to the Manitoba government's provincial crop report released July 9, the rains will benefit crops.

Temperatures have been variable recently, with cool and warm periods during the last couple of weeks. Crop development is still significantly behind normal in most areas. Crop needs include continued rainfall and warmer conditions on a more consistent basis. This is needed to ensure enough progress toward maturity prior to the first autumn freezes.

During the next five days, light to moderate rains, with locally heavier amounts, are expected through most northern and eastern crop areas. This should help maintain and improve soil moisture conditions for developing crops. Meanwhile, rainfall through southern Alberta and southwestern Saskatchewan during this period is projected to be light and scattered. Dryness, especially in southern Alberta, remains a concern for crops in the southwestern Prairies. Temperatures are expected to turn higher during the next few days. The central and east areas will continue warmer than normal through next Wednesday, which should help to push development of crops along. Western areas will turn cooler again later in the five-day period. Crop development in the west will advance at about normal. This means that progress will still be behind average.

Through July 18, the Prairies forecast calls for more rain chances, notably in eastern and northern areas. The southwest sector, however, has only limited rain prospects. Temperatures, in general, do not appear to deviate from seasonal values. However, the western sector could see a below normal trend.

Rainfall chances again favor northern and eastern areas of the Prairies during the next two weeks, while in the southwest areas, rain is not expected to meet the expected needs of these crops.

The temperature pattern in the eastern crop areas should be warm enough to allow for more normal development of crops, while in the west, lower temperatures will slow growth rates at times. The temperature trend is not likely to reach much below normal levels; however, at this point, any trend towards below normal temperatures is not welcome, especially in western areas. 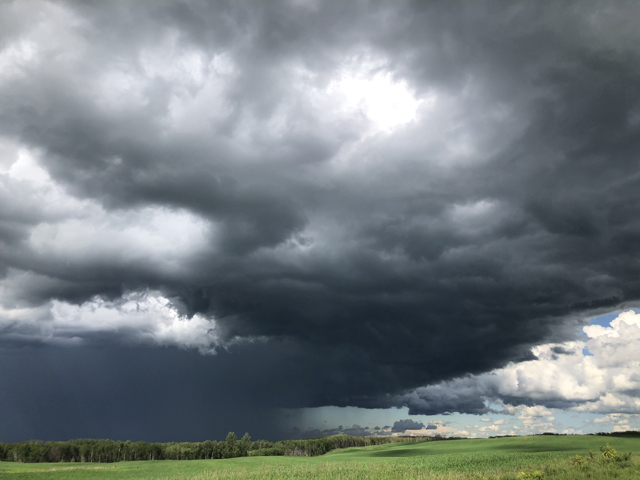