The driest areas of the Canadian Prairies region during the 60-day period ending June 27 include southwest Saskatchewan, southern and central areas of Alberta and central and east areas of Manitoba. Rainfall that has occurred during the past week fell in a portion of these areas.

There appears to have been enough rainfall to help improve prospects in parts of central Alberta and to slow the decline of crops in Manitoba. However, elsewhere in the dry areas, more rain is needed to ease developing stress to crops. Areas that may be too wet include: southeast Saskatchewan; a portion of western Manitoba; along with a little of northwest Saskatchewan and far north Alberta. Rainfall during the past week occurred over the southeast Saskatchewan area. This additional rainfall was actually not needed, and was probably not welcome.

A new round of rain is expected to hit Manitoba and possibly southeast Saskatchewan during the next 48 hours. Showers should fall in much of the region within the next five to seven days. Rain would be welcome in most of Manitoba, while in southeast Saskatchewan the rain is again not needed or even welcome. Temperatures during this period will continue to favor development of crops at or ahead of normal, especially central and east areas. A cooling trend in the west may slow development at times, but not to the point where it would be overly concerning.

For the longer-range forecast, we turn to the mean upper-level maps from the U.S. and European weather models covering the eight- to 10-day period or July 5 to 7, late next week. These maps show a strong U.S. high pressure ridge pushing northward towards the northern U.S. The impact on the U.S. is for hotter and drier weather in key growing areas. This ridge forces the jet stream a little further to the north than it has been. This likely means a storm track from the Pacific Northwest of the U.S. northward into the Prairies. The U.S. model shows more of a west-to-east flow in Western Canada. This would likely be somewhat drier in the Prairies, especially west and north areas. The European model has more of a southwest-to-northeast flow in the Prairies. This might suggest more rain for central areas, assuming at least some moisture comes in off the Pacific Ocean. In either case, a warmer pattern continues in the Prairies.

It appears likely that crop conditions would be helped in some areas by showers that occur in the region during the next week. However, due to crop moisture needs and the warm weather, there may be areas that do not see enough rain to prevent a continued decline in topsoil moisture. There is also at least some risk that wetness may become more of a problem in portions of southeast Saskatchewan, depending on the exact storm track during the next week or more. In either case, it appears crop prospects may vary considerably from place to place across the Canadian Prairies. 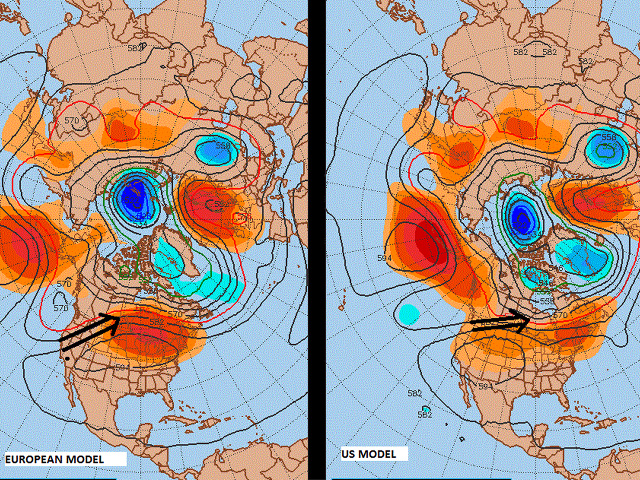