Dryness across portions of the Canadian Prairies grain and oilseed areas is becoming of increasing interest as we move through May.

The temperature pattern for the Prairies grain belt has continued to moderate from the extremes of winter and early spring. We still see the occasional cold snaps, as is currently occurring in the region, but we are also now seeing more extended periods of warmer weather in between the colder periods.

This temperature pattern, when combined with the increasing number of hours of daylight, is likely to warm soils significantly and allow increasing planting activities. The outlook for temperatures during the next couple of weeks shows a continued more favorable pattern for the region with significant periods of warming and only shorter periods of significantly cooler conditions.

As temperatures become less of a concern, we now look to the rainfall summary and forecast. The 90-day rainfall, as a percent of normal as indicated in the included graphic, shows many areas with below or well-below normal rainfall and a few areas with normal or above-normal amounts.

Drier weather at this time does allow a favorable planting season, with a few exceptions. The south-central to the southwest areas of Saskatchewan are showing rainfall above or well above normal for this period. Farmers in this area are likely to experience continued delays. Aside from this region the moisture levels of the soil should favor planting progress at this time. The dryness indicated in Manitoba, extreme east Saskatchewan and in the area of Alberta and Saskatchewan between Edmonton and Saskatoon is likely to cause some concern for farmers if it does not change within a short time following planting.

The rainfall forecast for the Canadian Prairies region during the next seven days continues to feature little of significance for the driest areas of the growing belt.

The best chance for showers during this timeframe is in southern Alberta and southwest Saskatchewan with little expected outside of this area.

The longer-range outlook is somewhat more uncertain. Today's runs of the U.S. and European forecast models does indicate a chance for some rain moving up from the south late in the 10-day forecast period.

The pattern keeping it drier at this time focuses on the east Canada trough and the west Canada or northeast Pacific ridge. Northwest flow between the ridge and trough in the Canadian Prairies region is generally a drier-than-normal flow. The models continue to show a weak to moderate trough over the western U.S. that continues to send disturbance through the northern portion of the Central Plains region and into the Midwest.

The idea of bringing this north into the Prairies revolves around a strengthening of the southern U.S. ridge pushing these disturbance north and a weakening of the ridge-trough pattern in Canada to allow this to occur.

I have my doubts as to whether or not this would occur within this 10-day to two-week timeframe. The best chance, if the rain does manage to reach the areas from the south, would be in the southern Saskatchewan area and in this area it is probably not needed or even welcome. It the rains were to reach the Manitoba area, especially after another seven days of dry weather, it might still delay planting but the rain would be welcome to help ease dryness concerns.

My feeling at this time is that another week of dryness with periods of warmth will favor increasing planting of crops through much of the region. The dryness concern will increase with time, until such time as seasonal rains begin.

The concern will be greatest in areas that are currently very dry, especially following planting. I also believe the overall rainfall for the region will continue to average near to below normal during the next week or two and the drier pattern may continue longer than that.

However, so long as we have an active pattern south of the region there will be some uncertainty in longer-range outlooks. If it were also to turn drier in the U.S. then the odds of the Canadian Prairies getting needed rains would also drop off. 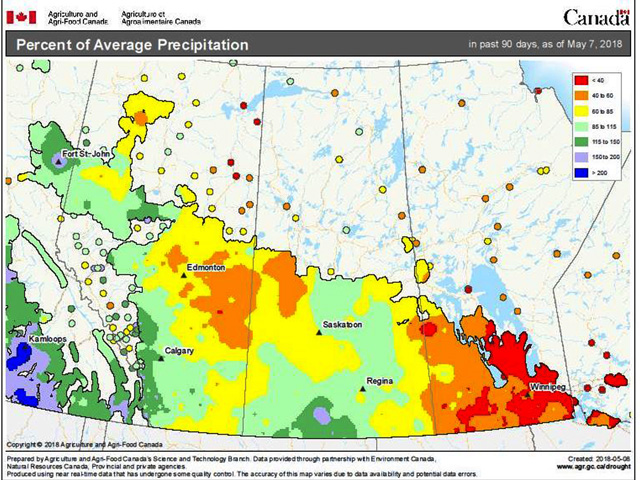