The Hydrologic Forecast Centre in Manitoba in its February Outlook Report continues to forecast a moderate to major risk of flooding along many of the rivers in the southern Manitoba region.

The magnitude of the spring flood will likely depend a great deal on the weather patterns during the next two to three months in this area.

Additional snow or rain added to the region would likely increase the risk, as would a rapid snow melt at some point during this period. A drier weather pattern and a more gradually snow melt would help ease the risk of flooding somewhat. As we look across the balance of the Canadian Prairies, we see a much less risk of spring flooding. This is due mostly to below-normal winter precipitation in the region and warmer periods that have melted some of the snow cover.

The short-range weather outlook covering the next 10 days to two weeks shows a somewhat variable temperature pattern. Precipitation of around 0.25 to 0.40 inch (6 to 10 millimeters) is possible in some parts of the area, especially from southeast Saskatchewan to Manitoba, but this is not likely enough to alter the situation one way or the other.

The longer-range outlooks covering the next two months are somewhat more mixed. We see some chance for near- to above-normal precipitation during the March but since the normal precipitation during March is still relatively low, this would not be a big concern. The temperature pattern during March is likely to be fairly changeable. There should be periods of warmth and also some periods of cold weather. Overall, I would expect a net melting of snow cover during the month, but probably not enough to be a concern.

The outlook for April is in early stages at this time. The temperature pattern looks to trend towards above normal for the month, increasing the risk for a rapid snow melt. However, it may also trend towards below normal rainfall or precipitation during the month. It is difficult to say whether one would offset the other, but due to the current situation in the region, I would have to say the weather pattern during April would be the key to the flooding risk.

The Pacific Ocean might hold the key to the spring weather patterns in Western Canada. There continues to be a rapid increase in the sea surface temperatures through the eastern Pacific Ocean suggesting a strong move towards El Nino this spring. This could signal a trend towards above-normal temperatures and below-normal rainfall for the region. This would likely mean, if verified, that areas that are not currently under a moderate or severe risk of spring flooding would not be added to the potential concerns. However, for southeast Saskatchewan and Manitoba there could still be significant problems even with a warm and dry spring, mostly due to the potential for a rapid snow melt and the already saturated soils in the area. 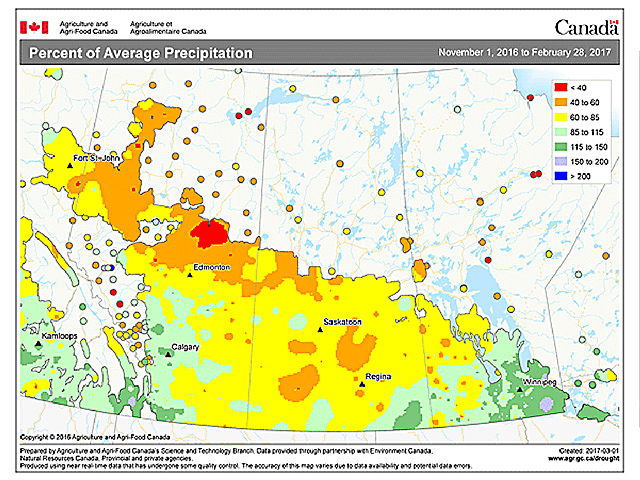