This changed as we moved into December when a major high latitude blocking ridge set up over Alaska and northwest Canada early in the month. It did not take long for this ridge to stop the flow of moderating Pacific Air masses from moving in and for a strong Arctic high to form.

This high moved south before too long and much of Canada went from seeing well-above-normal temperatures to experiencing well-below-normal, Arctic type, cold weather. The polar trough or vortex moved well south during this period, as far south as southernmost Canada and even into the northern United States for a time during the first two weeks of December.

The pattern has once again relaxed across the high latitudes of North America as the blocking ridge is gone and the polar vortex has returned to a more normal position for mid-December. This allows westerly winds to push eastward across southern Canada and serves to moderate air masses as they move from the polar region southward. This allows for more seasonal type cold weather, but mostly prevents major cold outbreaks from forming. The question now becomes are we likely to see a repeat of the early December cold weather, or is the warmth of November more likely going forward?

We look to the mean maps covering the eight-to-10-day forecast period from the U.S., the European and the Canadian weather models for signs that the blocking ridge might return to influence the weather patterns. There are a few things to consider as we look at these maps. The first is the tendency for above-normal heights aloft and a weak-to-moderate ridge to form near or just off the coast of North America. This is shown on all the models with varying intensity. The red shading in the area indicates above normal heights aloft and the northward bulge in the contour lines shows the ridge line. This is a first step in developing a ridge west-trough east pattern and may be a sign of another turn to cold weather. The next area to look at is the north-central Pacific and well-above-normal heights of a new ridge in that locations. The nose of this second ridge appears to be trending towards Alaska. If this ridge does make it to Alaska or northwest Canada, it could mean a new Arctic type event might begin to form. Finally, we look to the east where we notice the polar vortex showing signs of moving southward again. This also is not to the point where it would trigger a new plunge of Artic air towards southern Canada and the northern U.S. but it is getting close.

The maps covering the eight-to-10-day forecast period are interesting as they suggest we might be in line for another push of Arctic air in Canada. However, I would like to point out that this is a relatively new development in the models and we would not want to buy into this idea yet before seeing if these trends will continue. I believe the most important of these developments would be the return of a strong upper level ridge to Alaska.

This is what I will be looking at during the coming days to give a clue as to the future weather patterns in Canada. For now, I would have to say stay tuned and keep an eye on the north Pacific ridge and the polar vortex. I feel that this pattern will eventually lead to a new Arctic outbreak, but it is not clear whether this will be sooner, rather than later. 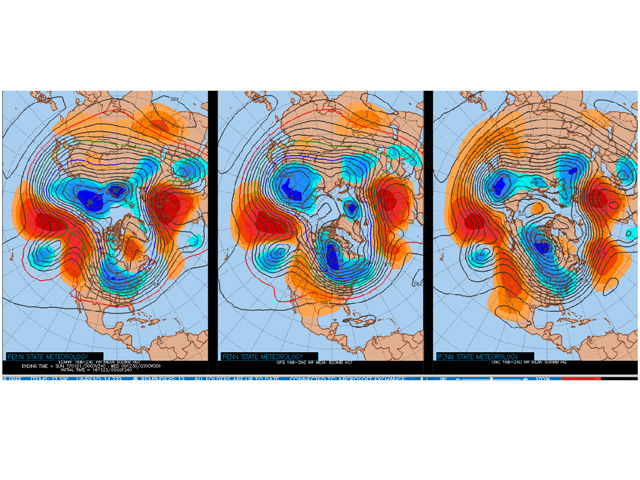 Meral Martin
12/23/2016 | 9:41 PM CST
Thanks for posting the pictures, have wondered what happened at the source of the outbreak. Thanks.